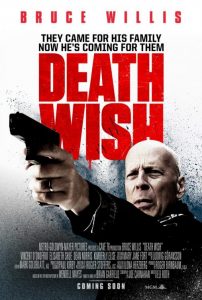 A mild-mannered trauma doctor takes the law into his own hands in Death Wish.

Doctor Paul Kersey (Bruce Willis) followed all of the rules. He worked hard; married right; raised a great kid; had a successful, high-paying career; and pretty much lived the embodiment of the American Dream. When tragedy invades his idyllic world, Paul quickly grows frustrated with the unreliable process of real-life justice. He sees a new world through jaded eyes — one that belies the stability and honor that once defined his daily existence. His only solace comes when he sets forth on a new path of personal justice and judgment. Is the old Paul dead and buried under a mound of harsh realities, or will he emerge intact after the storm has passed?

Director Eli Roth reimagines a story of vigilante righteousness first made famous in the 1974 film of the same name starring Charles Bronson. That original incarnation spawned four sequels through 1994. I can only hope that this version grants my wish and dies the quick box office death that it so blatantly deserves. If it kills Roth’s directing career in the process, that would be a nice, poetic bonus.

It’s not that everything about this film is broken. Quite the contrary. It starts off with an electric opening that jolts the audience into frenetic fascination, but the magic only lasts for 20 minutes or so. Once we get a full whiff of the stench that permeates this film’s plot, we quickly start hunting for the air freshener… by the case. This love letter to vigilantism couldn’t possibly be more poorly timed for release. It glorifies gun ownership, suggests that cops are just fine with murderers as long as they drive a BMW and body slams every ounce of morality that tries to bloom in its space. In other words, it’s quintessential Roth. I don’t know what crippling nightmare screwed up this guy’s head, but at this point, I have to assume that his body of work is just one big cry for help. We hear you, Eli! Someone should get this man a therapist.

As for the rest of the film, it’s hardly worth the effort to delve much deeper. It is nice to see Elisabeth Shue (playing Paul’s wife) back in front of the camera, even if her role here is as unmemorable as the rest of the film. Willis gets through it, but he mainly looks worn-out and bored. Joe Carnahan‘s script is an affront to intellect. First, there’s the contradictory way that it handles Paul. Everything we’re told about him in the first act vanishes without a trace soon after. He slides into his new skin with far too much ease and revels in it like Satan in a Bangkok bordello.

The wider plot is filled with holes larger than any gunshot wound that the good doctor ever had to patch up. We also have to endure an entire subplot involving Paul’s brother Frank (Vincent D’Onofrio) that exists only to distract us.  Of course, the cops are one abused cliché after another. When they realize that the man whom they’re after has a wounded left hand, they’re somehow incapable of finding any means to get Paul to show his. Forget that it took them forever just to realize that their suspect was left-handed even though video of his exploits is plastered all over social media.

This entire film just made me feel dirty, and that’s not the kind of experience that most of us are looking for outside of an introspective documentary. I need a good, long shower and a hearty bar of soap. 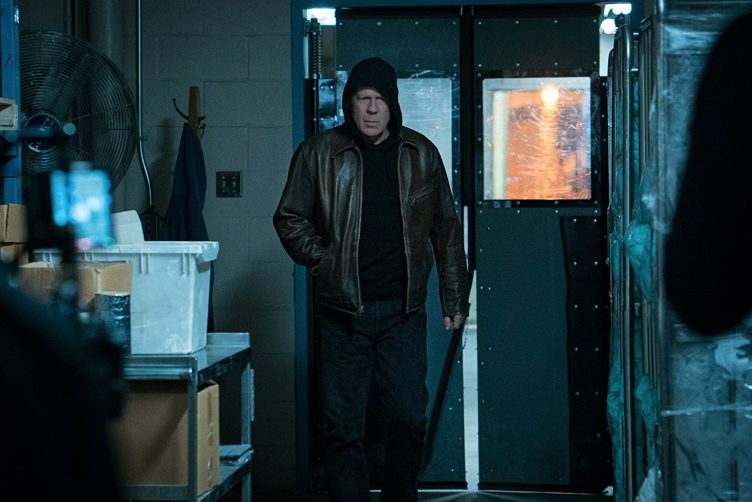