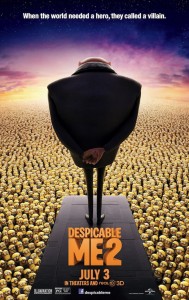 Gru and family return for a sequel to the 2010 smash-hit original in Despicable Me 2.

In the new installment, Gru has given up his evildoing aspirations in order to focus on being the best father he can be for his three girls — Margo, Edith and Agnes. Unfortunately, his evil past means he’s also the best choice to help the Anti Villain League solve a dastardly crime that they’ve been unable to crack. He’s called on to help save the world with the help of a new, resourceful and perky partner — Lucy.

The sequel represents a dramatic shift from many of the elements of the very novel first film. The most striking change is that Gru’s days of being despicable in any way are pretty much behind him. Gru is a father now, and he’s totally dedicated to the effort of raising a loving and respectable family. This, of course, changes the dynamics of the previous plot entirely. Instead of a simple “dominate the world” tale, what we get is a much deeper story about responsibility, caring, growing up and maturing.

Of course, there are Gru’s Minions. Let there be no doubt as to their lead role here. They’re everywhere, playing ever-present comedic foil to Gru’s new straight-man persona. Much of it is predictable but still rather fun. If you didn’t like the Minions in the first film, then avoid this one at all costs because, like the poster, their yellow visages dominate throughout. 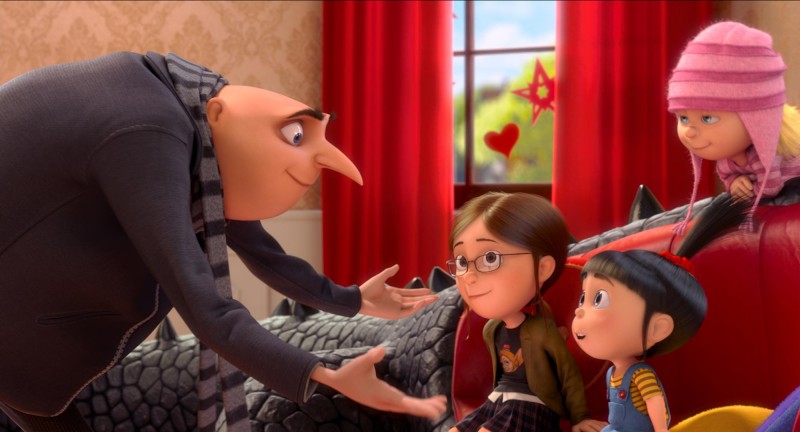 The story itself, while a near-total departure from before, is quite elegant, touching, cute and often hilarious. The daughters are, as always, undeniably precious, with lovable young Agnes stealing the show. No parent will be able to resist the tugging of heartstrings she evokes time and again. This is a film with unexpected emotional depth that works on every level. The humor is also well balanced for the entire audience. Parents will laugh at the more mature jokes that sail over the heads of the kids while the kids will laugh at the more juvenile pranks that abound.

The look of the film is exceptional. It impresses from start to finish. The 3D was fairly average until it finally gets its best use during the closing credits. Stick around for a few minutes to enjoy the fun.

There’s a lot of varied music in the film, and it’s effective if not overly memorable.

This entry into what’s now clearly a major franchise is an excellent addition to the series. Who would have guessed that a movie about a despicable villain would be able to do a complete reboot into a heartwarming family comedy and make it all work? Surely not me. Everyone responsible deserves credit, and I think that they’re going to get it in the form of strong box-office returns.