If you keep an eye out for viral videos, you probably saw the “devil baby” video that made the rounds this past week. It was a clever and hilarious promotional prank for the new film Devil’s Due. They put an animatronic baby that looks possessed or demonic in a remote-controlled carriage and rolled it around New York City, popping it up to scare random people who approached the carriage. The video was effective in that it got people to talk about the prank and, perhaps, the movie. I’ve seen it a few times, but it still made me laugh each time. I was afraid that the video would be more entertaining than the actual film it promotes, but I went into Devil’s Due with a glimmer of hope anyway. Sadly, the marketing people behind the excellent video should have made the movie itself. Devil’s Due is derivative, annoying and hardly scary or shocking. I’d vote for an abortion, but this lousy flick was dead on arrival before its delivery.

Even worse than the lack of enjoyment, or maybe the cause of it, Devil’s Due is one of those stupid “found footage” movies. This horror subgenre was interesting once or twice and would still be effective if done right. Now, everyone’s cashing in on the cheap-to-make trend, and I just want it to stop because these latecomers are nowhere near as effective as The Blair Witch Project or the first Paranormal Activity. Codirectors Matt Bettinelli-Olpin and Tyler Gillett (cowriters/codirectors, among others, of the “10/31/98” segment of V/H/S) and writer Lindsay Devlin — is her last name real? — start with a premise that’s been done many times before, especially in Rosemary’s Baby. Samantha “Sam” McCall (Allison Miller of Terra Nova) and Zach McCall (Zach Gilford of The Mob Doctor and Friday Night Lights) are newlyweds on their honeymoon in Santo Domingo when a creepy cab driver (Roger Payano) takes them to an exclusive dance club that looks like an underground cave. The two black out, and when they return to the States, Sam is pregnant. Strange things begin to happen to her over the course of the pregnancy, and it’s clear that there’s something not altogether natural about the baby she’s carrying. So far, none of this is original at all. When strange people — all part of some weird cult — start to shadow the couple, this feels even more like other movies about special babies.

Perhaps the twist on this old tale is the found footage angle. If that was the plan, they should have shoved it back in. It’s strictly not much of a found footage movie because it’s implied in the plot that much of the video was stolen or destroyed. Instead, it’s the second incarnation of this genre in which there are a lot of very loose excuses for people to hold cameras, and not much of it feels natural. You have to watch this entire movie as if you were looking through the lens of a video camera or the closed-circuit cameras conveniently planted by the cult members. That’s too much to stand for more than a few minutes unless it’s done creatively. It’s not. Had they just filmed this mess like a traditional movie, it would have been more tolerable and enjoyable. I would have assigned it another star. After all, the last 10 minutes are good even if the first 80 are not.

Miller and Gilford are the focus of the film, and they offer good performances. Miller was a standout in the expensive, single-season Terra Nova. Gilford looks like he could be Andy Samberg’s brother, and that’s sometimes a distraction. Most of the cast shows up for a scene or two like the large wedding and reception or a first holy communion. Sam Anderson (Bernard in Lost) is wasted here with just a few scenes as Father Thomas, but I enjoyed seeing him in this post-Lost role anyway. Robert Belushi (son of James Belushi) also has a small role, but I’m not familiar enough with his work. The cast is simply not the problem here. From the doctors to the various friends and family members, none of it feels like B-movie acting. I think they actually stunted the growth of this movie by forcing it to be seen through various camera lenses. 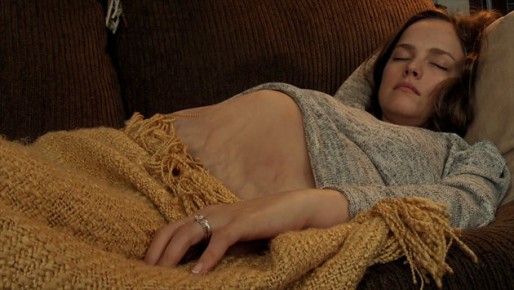 This is supposed to be a horror movie. It feels like a trip to the doctor where you spend over an hour in the waiting room. Nothing much happens for a long time, and then it’s over 10 minutes later. Twentieth Century Fox spent some money on subtle effects like windows smashing and people levitating. That stuff is more startling than it is frightening. With the promise of a demonic baby, I expected something akin to The Omen or its sequels. Other than some bloody scenes in the finale and a memorable bit with Father Thomas, Devil’s Due is rather tame. Many of the supposedly terrifying scenes are in the trailers. The arrival of the child happens too late in the movie for it to save the film, and the finale is actually pretty anticlimactic. More scenes with the cult and the removal of the first two-thirds of the movie could have had a dramatic effect. Instead, audiences are left waiting for something interesting to happen for most of the 90-minute run time.

I should have known that Devil’s Due would be stillborn. This is the time of year when studios dump their worst movies into theaters while everyone concentrates on the award winners. Like Paranormal Activity: The Marked Ones, some people will get sucked in by the marketing campaign and then feel ripped off afterwards. I would have rather watched 90 minutes of the devil baby pranks. They could have dressed it up in funny costumes and added props and sound effects in Jackass-like stunts. A film like that would be worth my time. Devil’s Due is not. You’d be better off watching one of the nominees for various awards than dealing with this dirty diaper. I think I’ll go watch that viral video one more time.