Three seemingly unrelated families struggle to deal with basic human interaction and empathy as a result of technology that seems intent to push us all further apart in Disconnect. 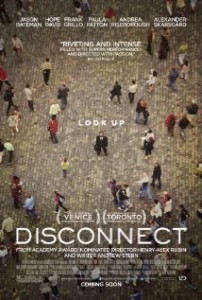 The latest film from director Henry Alex Rubin (Murderball) focuses on social media and its direct impact on the lives of people very much like the rest of us. The story introduces us to three different sets of people all dealing with their own issues and thus, more or less, the film breaks into several segments that only sometimes interconnect. There’s the Boyd family — an upper-middle class family that seems rather typical. Father Rich (Jason Bateman) has a job that keeps him connected to his clients while at the dinner table while his wife Lydia (Hope Davis) struggles to keep an open dialogue with her son Ben (Jonah Bobo) and daughter Abby (Haley Ramm). Both are typical teens who keep their phone’s battery draining throughout each meal.

The second story is one that bleeds over into the first. It involves two of Ben Boyd’s classmates who consider Ben ripe for cyberbullying. Jason Dixon (Colin Ford) and his best friend Frye (Aviad Bernstein) use their computers and iPad to create a fake Facebook profile with which to draw Ben in. Their creation is a girl from a neighboring school that supposedly sees a kindred spirit in Ben. Jason learned much of his “trade” from his unwitting father Mike (Frank Grillo), who happens to be an ex-cop and is now a self-employed digital security expert helping others protect their personal information.

Then there’s the overly ambitious reporter, Nina Dunham (Andrea Riseborough) who’s tired of being a bit player at a local station, and yearns to find the one big story that will catapult her to the major networks. She finds the story in the thriving world of live cam “chat rooms”. She pretends to be a customer and is immediately drawn to 18 year-old Kyle (Max Thieriot) who thinks nothing of stripping and sexually performing for anyone on the other side of the camera in return for money or a menu of “gifts”.

The last story involves Derek and Cindy Hull (Alexander Skarsgård and Paula Patton). They’re coping with the death of their toddler son. Derek, by disappearing into his work and online gambling, and Cindy by chatting online with friends in a support group. Their mutual approaches are driving them apart when suddenly they’re the victims of a major identity theft that threatens to destroy all the rest of what remains. They hire security expert Mike Dixon (Jason’s Dad) to help them get answers.

The film immediately reminded me of two other films in style — Steven Soderbergh’s 2000 film Traffic and Paul Haggis’ 2004 drama Crash. All three use similar elements and approaches to telling their stories. Even the look is similar with each story getting a slightly different stylization. The problem with such efforts is that it essentially breaks a single film into multiple smaller vignettes that often lack enough character depth to succeed. It’s also much harder to tell multiple complex stories than a single one. The odds of all of them working is quite low.

The ensemble cast is, for the most part, flawless. The standout of the bunch is Jonah Bobo playing young Ben. He plays the outcast so well that you feel his awkwardness and pain in every single scene. Jason Bateman gives the performance of his career. He plays a touchingly serious role as a father coming to grips with the realization that he’s effectively divorced himself from his own son and struggles to reconnect to the family he so clearly loves. Hope Davis as the mother also shines as does young Haley Ramm as Ben’s older sister. She has a scene at a school lunch that drives right to the cold, hard truth of the complete detachment many of us experience when it comes to our phones. Max Thieriot owns the role of the online porn model, Kyle. There’s not a role we don’t believe. Every scene in the Boyd home felt as if we were simply flies on the wall of a real family.

The overall story keeps you involved and engaged but it’s an up and down ride. The cyberbullying plot is far and away the best of the bunch. I can’t help but think the film would have been better off leaving the others on the cutting room floor and expanding this into a deeper, richer examination. The segmentation also heavily dulls any real message the movie is trying to convey. Is it just giving us a glimpse into a state of being or is it trying to say something deeper about the insipid nature of social networking? Either way it doesn’t quite fully deliver. When it’s good it’s exceptional and thankfully it’s good 90% of the time.