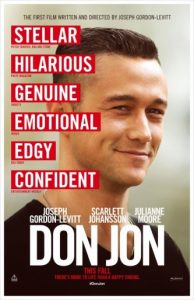 Jon Martello (Joseph Gordon-Levitt) is a character who could have been taken right off the set of Jersey Shore. He’s all about presentation. He works out incessantly, hangs out with a bunch of like-minded, limited friends who are all constantly on the lookout for the latest conquest. The only problem for “Don Jon” — his nickname — is that none of those conquests measure up to the level of what he experiences with porn. No matter how attractive the woman, he just can’t find any of them who feel, look or act the way women do in sex videos. For him, real women are full of limitations that he’s just not willing to accept.

Then, one day, he meets Barbara Sugarman (Scarlett Johansson). Barbara is a woman who knows exactly how to manage Jon, and it catches him entirely by surprise. Suddenly, he’s seeing life entirely differently — or so he believes. For the first time in his life, he’s willing to bring a woman home to meet his family. They’re made up of a carbon-copy father (Tony Danza), an overly doting mother (Glenne Headly) and his perpetually texting sister (Brie Larson). 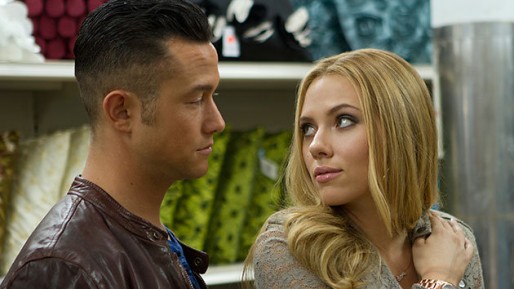 The biggest issue with the film is that it’s so overloaded with stereotypes and horribly overdone, clichéd accents that it takes half the film to almost forget about them. None of it feels genuine. It’s all a heavy spread of caricature that isn’t necessary and only gets in the way. There’s also a recurring odd tempo that breaks the flow of the film now and again.

When it’s good, it’s really good. This, ultimately, is a message movie with a real bottom line that we can all learn from (or have already learned). It’s just that it’s bad at least as often as it’s good.

Moore’s Esther is a highlight of the story, but she’s entirely wrong for the role — or at least she is based on what we’re given to understand about Jon. There’s just no way he’d ever give her the time of day. Then there’s the head-scratching character of Monica, Jon’s sister, who is so singularly wasted that it’s hard to imagine why Larson would bother. She gets a single, albeit important, line in the entire film.