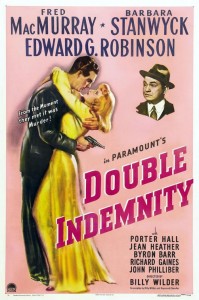 A sly but well-meaning insurance salesman is spellbound by his attraction for the calculating wife of one of his clients in Double Indemnity.

This classic film from 1944 is one of the 10 films that famed movie critic Roger Ebert asked me to watch as part of a discussion on the differences between various types of movie fans. It’s been a favorite of mine ever since. The film stars Fred MacMurray as suave, debonair insurance peddler Walter Neff and Barbara Stanwyck as scheming temptress Phyllis Dietrichson, who wills him to do her evil bidding.

We know at once that things haven’t gone as planned when the film opens with Neff dictating a confession to his boss about how it all went so wrong. In a flashback, Mrs. Dietrichson calls on Neff to ask about insurance policies for her husband. The streetwise Neff instantly realizes that she plans to kill off her husband and tells her, succinctly, that it’s a fool’s errand. He knows firsthand that insurance companies despise paying out claims. They employ teams of top experts adept at sniffing out the smallest hole in any plot. Every instinct beckons him to head for the hills, but her magnet-like charisma plays to his libido with the ease of the Pied Piper. Neff is just another rat drawn to her lyrical tune. 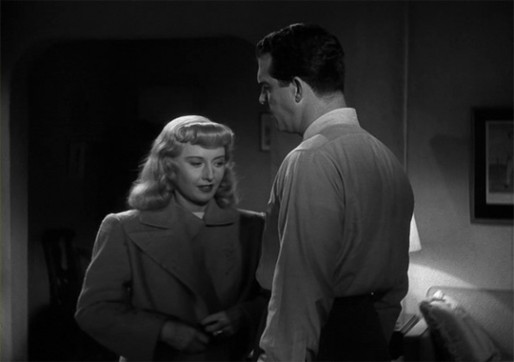 The most impressive element of the film is its relentless, almost frenetic, pacing that draws the tension ever tighter. Just when you think the story’s about to settle in, it instead finds another, higher gear and slams the accelerator to the floor to take us breathlessly along for the ride.

The acting — typical of the period — is a bit over the top but perfectly acceptable. MacMurray, who would later end his career playing mainly nerdy, somewhat incompetent fools, proves a very titillating first-rate Lothario, delivering lines with rabbit-punch effectiveness. The unconventionally attractive Stanwyck has no trouble playing the conniving seductress. The standout performance, however, belongs to screen legend Edward G. Robinson, who plays Neff’s obsessive boss Barton Keyes. Robinson portrays Keyes like a Bronx-raised Sherlock Holmes. When Keyes verbally undresses the owner of the firm in a late scene, it only works because of Robinson’s surgeon-like skills.

The atmosphere is dark and rife with ominous shadows throughout, perfectly framing the tenor of the story. The dialogue is sharp, witty and, at times, snidely humorous. For some, it might prove a bit distracting or inadvertently funny. Not only is it loaded with sexist discourse, but you could easily fashion a robust drinking game keyed on the word “baby.”

Era-related commentary aside, this is a first-rate roller coaster that will keep you glued to your seat from start to finish.