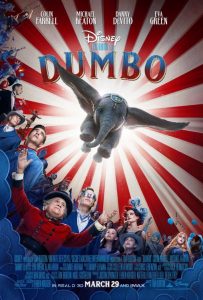 An abnormal baby elephant shows the world that its so-called drawback masks an amazing surprise in Dumbo.

In a bit more than a tip of the hat to P.T. Barnum and his collection of curiosities, the fictional Medici Bros. Circus is home to every misfit that their traveling caravan can hold. Its owner and master of ceremonies, Max Medici (Danny DeVito), is always on the lookout for another new spectacle. His latest scheme is the purchase of a very pregnant elephant named Mrs. Jumbo. He’s certain that a baby African elephant is just the thing to draw new patrons to the big top in record numbers. When the newborn bundle later named Dumbo finally arrives, the fanfare that Max expected is curtailed by concerns over the young pachyderm’s unusual oversized ears. Dumbo’s only supporters are a pair of determined children who help to transform the elephant into Max’s main attraction.

Disney‘s original 1941 animated version of a flying elephant soared high enough to save the studio from financial ruin. With a running time of just 64 minutes, it easily turned a substantial profit, one of just two for the fledgling studio up to that point (the other being  Snow White and the Seven Dwarfs). Its overweight reimaging might very well struggle to make back the cost of its posters. This is one elephant that needs to be put down.

Let’s start with director Tim Burton‘s “vision.” It’s myopic at best and blind at worst. Every character is as authentic as a wooden nickel. The antagonists might as well just wear T-shirts emblazoned with “Bad Guy” on them. One even walks around with an ominous cane even though he doesn’t appear to suffer from any malady beyond obnoxious stereotyping. It’s also shocking that Burton (or Disney for that matter) didn’t seem to realize that the main bad guy, V.A. Vandevere (Michael Keaton), runs a cutting-edge theme park, thus reminding everyone of Walt Disney. Nice job. Eva Green‘s character, a comely French trapeze artist, doesn’t need to utter a word before we know exactly how her story will unfold.  There’s also Colin Farrell playing an ex-trick rider who lost an arm in the war, but likely only because someone realized that a pirate patch would be a bit much. Burton also didn’t think that it would be at all strange to have boxing ring announcer Michael Buffer belt out, “Let’s get ready for Dumbo!” Burton can’t even spare poor Alan Arkin. His character, a major would-be investor, wouldn’t have backed the invention of the wheel had he been around at the time. The only semi-normal people in the film are the two children of Farrell’s character.

The namesake of the film starts off as cute and cuddly, but quickly morphs into a psychic superhero. In one scene, Dumbo heads off in search of his missing friends, but first fills his snout with water. When he arrives, he finds them trapped in a burning building. What a coincidence! He also casually operates the controls of the theme park’s sophisticated control tower more adeptly than its staff even though he’s never encountered a light switch before, let alone a series of complex electrical panels. Let’s not even ask how an elephant managed to walk through the tower’s standard doorway.

Disney is intent on turning all of their animated classics into live action films, but doesn’t seem to grasp the biggest question — “Why?” Some films are just better left as is, and this was one of them. Apparently, their lesson from 1941 didn’t stick. What was a brisk and adorable adventure is replaced with a two-hour train wreck. Dumbo may fly through the magic of CGI, but there’s no such wizardry capable of making this turd take flight. 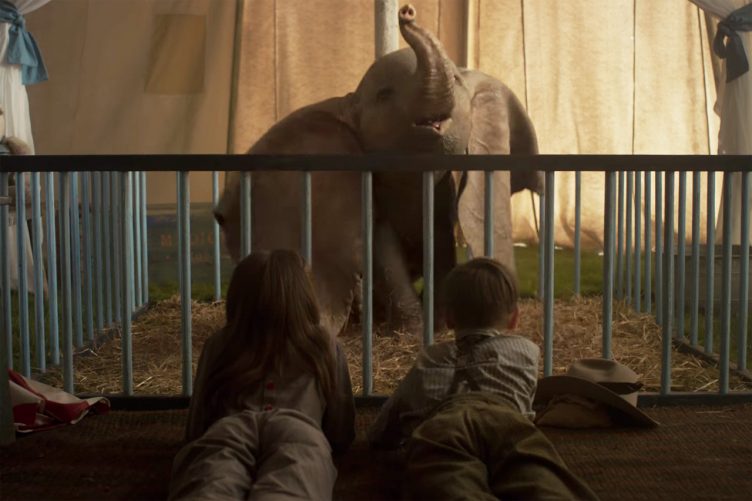