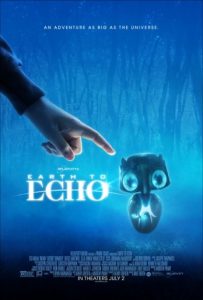 A group of friends follow a strange series of messages, leading them to a cute, otherworldly being in search of a way back home in Earth to Echo.

Three close-knit friends, struggling with the imminent end of their friendship thanks to a highway project that will level their neighborhood, find themselves captivated by one final group adventure. One by one, every cell phone in the neighborhood begins to fail in a way that seems oddly coordinated and compelling. As the friends put the pieces together, they realize that they’re actually witnessing some sort of message, complete with cryptic maps that lead them to the various pieces of a fantastical puzzle, the likes of which none of them have ever seen before.

The three friends — Tuck (Brian “Astro” Bradley), Alex (Teo Halm) and Munch (Reese Hartwig) — watch as each wondrous clue leads to another part of a small mechanical alien they dub “Echo.” They soon learn that the creature is hoping to recover all the pieces of a scattered alien craft so that he can return to his home planet. Their journey leads them to one of their schoolmates, Emma (Ella Wahlestedt), who willingly jumps at the chance to join in on the fun. They quickly realize that a nefarious government agency is also trying to track down Echo, turning their hunt into a risky race to the finish line. 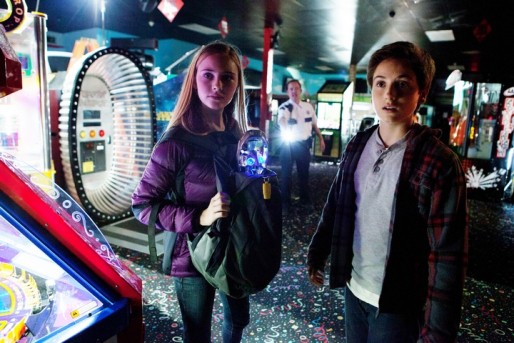 Here we have a sci-fi adventure that never gets off the ground in any way. Nothing, not one single thing, works in this disaster. The adorable alien is so enigmatic that we’re unable to figure out how we should react to it. Is it just a lost soul in need of help, or is it perhaps just some sort of advanced drone ready to report back to our future potential overlords? Echo’s limited vocabulary of beeps and boops provides few answers. This cheap shell-game approach keeps us in the dark just long enough to lose whatever compassion we might have otherwise built up.

The characters don’t help. They act and speak in a forced, awkward, artificial manner that I doubt even eight-year-olds would swallow as genuine. One of the boys, in need of a restroom, actually utters the ludicrous phrase, “I’ve got to get the pee out of my body.” Who could write that with a straight face? Then there’s the entirely unnecessary and distracting first-person camera view. Isn’t it time we retired this concept?

No sci-fi film would be complete without technology, but it all seems as if it was thought up by someone who’s never managed to properly use a remote, let alone a cell phone. Even the special effects are second-rate.

The one thing that you can entirely bank on with the film is that, without exception, every single adult is portrayed as deaf, dumb and bumbling. Echo’s actions often include wholesale destruction of his nearby environment with nary an adult taking notice. In the one case where a pawn shop owner does watch his entire shop reduced to scraps, he quickly asks about the alien, “Would you sell it?”

This poor imitation of E.T. the Extra-Terrestrial should have been left on the drawing board. Perhaps the most insightful thing to know about it is its history. It was fully conceived and shot by Disney who, upon seeing the embarrassing results, promptly sold it off to the first willing buyer. I suspect that the film’s main character, if he could type, would punch out, “Echo to Earth: Never mind.”