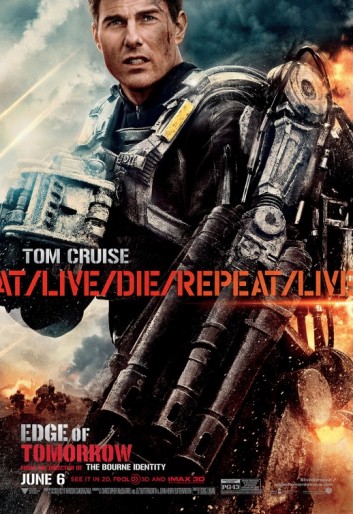 Wait a minute! Didn’t I just see and review a movie about time travel?! Yes, it was X-Men: Days of Future Past, yet here I am again with another review about a plot that jumps in time. Maybe I’m in a time loop, so I’d better try harder to get it right this time and do a better job.

The concept of a do-over is almost always involved in time travel stories as diverse as Back to the Future, Hot Tub Time Machine and, yes, Groundhog Day. Changing history to solve a problem or alter the future often lies at the center of these movies. They usually also involve avoiding actions that will just make things worse. In many cases, a character has just one chance to take action after jumping in time. In Groundhog Day, Bill Murray’s character had to relive the same day over and over again until he perfected every detail. With a tagline like “Live. Die. Repeat.,” Edge of Tomorrow hews closely to the repetitive approach to a plot. Despite this familiar track and various other elements that felt borrowed from our collective science fiction memory, I greatly enjoyed the film and will likely see it again in order to feel like I got this review exactly right.

Director Doug Liman (director of The Bourne Identity, Mr. & Mrs. Smith, Jumper and Fair Game) reteams with cowriters Jez Butterworth & John-Henry Butterworth (writers of Fair Game and The Last Legion) and cowriter Christopher McQuarrie (writer of Jack Reacher and cowriter of Valkyrie, The Tourist and Jack the Giant Slayer) to provide an adaptation of Hiroshi Sakurazaka’s All You Need is Kill. An alien race called Mimics — called this perhaps they mimic the similar tentacled aliens in The Matrix Trilogy — have taken over Europe, and Earth’s armies have come together as the United Defense Force (UDF) in order to fight back against the overwhelming power. Major William Cage (Tom Cruise) is nothing more than a glorified PR man for the UDF with no combat experience. He’s completely shocked after General Brigham (Brendan Gleeson in, essentially, an extended cameo) insists that he report from the front lines and then shackles him for a trip to the launch base at Heathrow Airport when Cage refuses. Once there, he’s attached to J Squad, run by Master Sergeant Farell (Bill Paxton in a leadership role completely opposite his whining soldier in Aliens) and full of misfits. The squad is dropped into battle and quickly slaughtered, after which Cage wakes up again on the tarmac at Heathrow to repeat his experiences. He alters his behavior based on what he remembers from before and starts to learn about his time dilemma when he meets Rita Vrataski (Emily Blunt), a legendary warrior known as the “Angel of Verdun.”

I should say little more than that about the specifics of the plot. It’s especially poignant that Edge of Tomorrow came out on the 70th anniversary of D-Day because the beach scenes are reminiscent of both the hopelessness of the situation and the bravery in the Normandy landings. Like all time travel movies, Edge of Tomorrow has its rules, and I applaud the writers for making them simple and keeping to them. There are discussions to be had about aspects of the time loop and the ending, but they don’t belong in a review. Sure, this is all far-fetched with plenty of holes, but I have the ability to put all of that aside if a film takes me on a ride and doesn’t throw me off. The aliens are so quick that it’s amazing that humans can make even a small dent in their forces, but the writers have got an answer for that, too. I was captivated from start to finish and wanted there to be another twist in the plot to go over this momentous day in human history yet again.

I’ll admit that I’m not always a fan of Cruise. In particular, I dislike the smarmy, smiling characters with a shit-eating grin that pepper many of his projects. The Cage that starts this movie is one of those characters, and I cringed as this Cruise was present in the first few minutes. Fortunately, this Cruise went away and my favorite version of Cruise emerged in which he’s less like an actor and more like an everyman stuck in a situation that requires him to go beyond himself. Maybe it’s an action or science fiction thing because I liked Cruise in this picture, Oblivion, Jack Reacher, War of the Worlds and the Mission: Impossible series. Blunt is a powerhouse here. It’s no surprise that the graffiti on a bus refers to her character as “Full Metal Bitch.” She’s buff, confident and in control of every moment. Blunt and Cruise do a lot of action scenes and stunts, especially in bulky “ExoSuits,” so I was convinced by the two leads that they belonged in battle. The J Squad members are a ragtag bunch of soldiers from all over the place. Kimmel (Tony Way) likes to wear his ExoSuit without pants, and Nance (Charlotte Riley) is as much of a badass as any of the guys. If there’s a major flaw with the film, it’s that the J Squad individuals don’t figure more into the plot with their unique personalities and abilities. The story could have been even better with their increased roles. 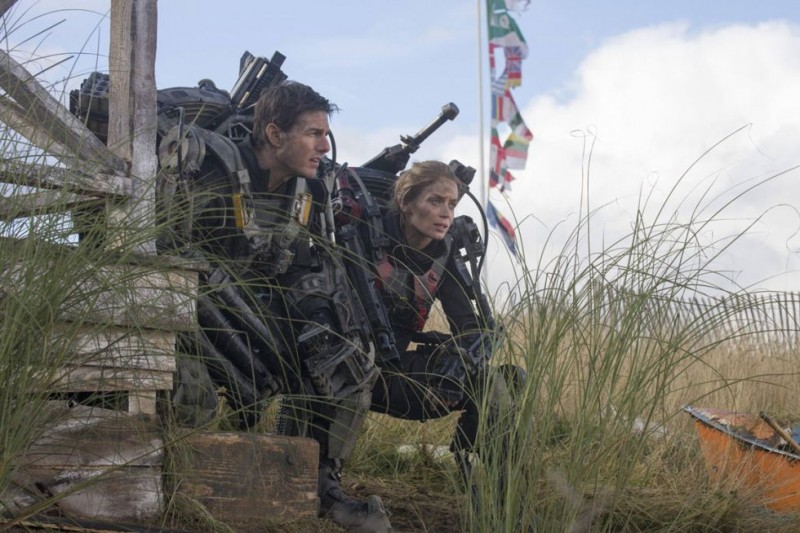 The special effects are phenomenal and seamless from the ExoSuit mechanics to the complicated battle scenes. When are special effects anything less than impressive in a major movie these days? I was especially taken by the grittiness of the entire movie. The UDF soldiers are dirty back in the barracks, so they really get messy once the battle starts. The speed of the Mimics and the fast editing keep you on your toes. You won’t get bored watching Edge of Tomorrow even as the same day and incidents are repeated. Liman’s skills from films like The Bourne Identity and Jumper are clearly on display here.

Those who don’t like Cruise will still find a certain joy in watching him die over and over again in a variety of ways. There’s humor in many scenes despite the soldiers’ grim prospects because Cage and Vrataski take a matter-of-fact approach to their necessary deaths to keep the time loop in motion. Vrataski seems to delight in killing Cage, and the audience might find the humor in that as well. Christophe Beck’s pounding music is essential to the action scenes, so find a theater with a great sound system. Only John Newman’s credits song “Love Me Again” stands out. I was surprised that the ethereal “This Is Not the End” by Snow Patrol member Johnny McDaid’s band Fieldwork is not in the movie at all because it perfectly captures the mood of the movie and was featured in the trailer and on the official Web site. This summer is looking up for action movies, and Edge of Tomorrow just keeps the ball rolling… in an endless circle.