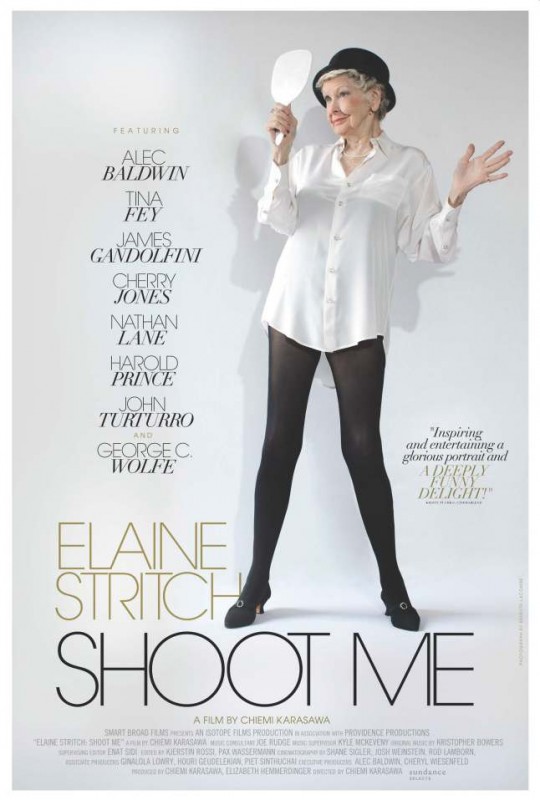 It’s a testament to Broadway legend Elaine Stritch’s resiliency and longevity that someone she adored, James Gandolfini, has passed on and she still sings his praises and keeps chugging along. It’s impossible to have any interest in theater or the classic shows of the New York City theater scene and not know of Stritch or her considerable talents. Indeed, she seems to get praise wherever she goes, no matter if she’s barking at someone or not. Elaine Stritch: Shoot Me may at first appear to be a puff piece about the Tony and Emmy award winner, but the documentary instead mirrors the actress and shows that there’s much more underneath the obvious surface qualities.

Director Chiemi Karasawa has been a producer on various documentaries as well as a script supervisor on films like High Fidelity, Where the Wild Things Are and Romance & Cigarettes. Perhaps this last film was the genesis of this documentary because it was written and directed by Stritch’s friend John Turturro and Stritch played the mother of Gandolfini’s character. Regardless of how it came together, Karasawa films the good and the bad in Stritch’s life over the course of a year as she turns from 86 to 87 and, as Stritch notes, gets “older” — not “old.” If you don’t look any further than the brash broad who struts around in a long white shirt, black leggings and no pants, then you miss the lady whom this film presents. Karasawa keeps the cameras running when Stritch has both panic attacks and diabetic incidents, and she even catches some sweet moments along the way.

The movie poster alludes to the stars who have something to say about Stritch. The list includes Alec Baldwin, Tina Fey, Gandolfini, Nathan Lane, Cherry Jones and Harold Prince, the director of Stritch in Company. When I see a poster like this for a documentary, I cringe because it often indicates a “talking heads” type of documentary that I know will just put me to sleep. There’s no sleeping here because Karasawa keeps the comments from the people on the poster and others to a bare minimum and lets Stritch’s spirit and presence infuse the movie. The actress is somehow both acerbic and lovable at the same time, and the interviewees allude to the many dimensions of Stritch, including her friend Julie Keyes. She tells the story of her first encounter with Stritch at an AA meeting and how Stritch managed to talk her into giving her a ride and slowly insinuate herself into Keyes’s life. Knowing Stritch seems to be like a roller coaster ride for many of her friends and associates; they just hold on for dear life as they have a great time amid the danger and screaming.

The documentary starts off with Stritch taking a stroll through the streets of New York City in a showy fur as people stop to say hello when they recognize her. It’s no doubt that the camera following her called attention to the scene, but I would imagine that every walk that she takes has the same happy interruptions. Stritch lives at The Carlyle Hotel, and she’s practicing for a tour of Stephen Sondheim songs as well as a show downstairs in the Café Carlyle with music director Rob Bowman for much of the film. Stritch got her start on Broadway in 1944, so she has built up quite a repertoire of material, including the Sondheim songs she attacks and finesses sometimes in the same line. Karasawa takes us deeper into Stritch’s life than rehearsals and the all-too-brief montages of photographs and clips of her performances. Indeed, it’s the other stuff that caught my attention as Stritch freaks out when her blood sugar goes out of control or forgets the lyrics to a song. She struggles with diabetes and alcoholism but seems to mostly have control of both. Her theory is that she can have just one drink a day instead of indulging in more. These ailments seem to be more annoyances to her than hindrances. She deals with them and moves on. She reflects on the inevitability of death and dying and says, “I just pray that I can be at least amusing about it.” 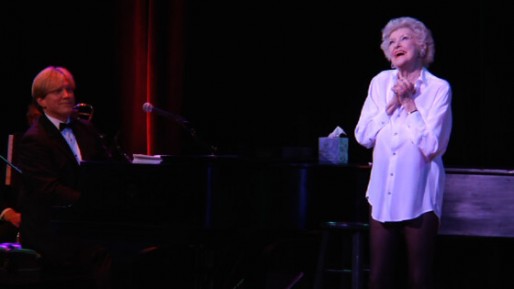 Comedy is as much a part of this entertaining film as the more serious parts. She yells at one cameraman for being too close and another for not following her as she goes from one room into another. Stritch may not have the best singing voice because it’s raspy and strained at times, but it’s unquestionable that she has excellent timing and acting skills that put such emotion and life into her efforts. In some of the performance footage in the show, she has complete command of the audience, and they love every minute of it. When she forgets the words, she proudly professes to the audience that “If I forget my lyrics, fuck it!” Equal parts vulgar and sweet, Stritch would fit right in with many of the crotchety men so overused in movies and would outshine them from the first frame. Gandolfini lovingly points out her “bullshit meter” and how she doesn’t let anyone get away with trying to put one over on her.

If there’s any major fault with the film, it’s that it’s too short at around 80 minutes for someone of such an extraordinary life. The clips and images are crammed in instead of giving the audience a bigger taste of Stritch’s career. Karasawa structures the movie well as it peels off the crusty layers to peek at the vulnerable, affectionate woman underneath who grew up in Michigan and was headed for the convent before taking up acting. When Stritch is taken to the Stella Adler Studio of Acting to examine the rehearsal room that they plan to dedicate to her, she surprisingly but firmly decides that the room is too big and elaborate and instead suggests a smaller room with some folding chairs against the wall. Stritch is a living contradiction — one moment impudent and the next telling wonderful stories about her family. Stritch no doubt has thousands of stories up her sleeves, and Karasawa could have given us some more that she undoubtedly filmed. The tale of Stritch’s date with John Kennedy is worth the price of admission and exemplifies the duality of her nature. Elaine Stritch: Shoot Me draws us in and spits us back out the other side with smiles, an appreciation for the subject and the perfect Elton John song over the credits.