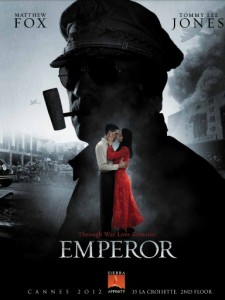 Although I was an AP scholar in both European and American history in high school, I don’t count myself as a history buff. An occasional historical biography or autobiography is about the extent of my interest. This limitation means that I can’t always tell the real history from the events on the big screen when I watch a movie. One could argue that you shouldn’t need to know how close a script matches reality in order to enjoy a film. I liked Lincoln, and I couldn’t tell you what was wrong about that movie other than some of the votes by certain members of Congress that were improperly portrayed. I only learned about those votes from the hullabaloo in the press. Similarly, I don’t know much about the reconstruction of Japan after World War II or the investigation of Japanese officials for war crimes. Emperor addresses this time frame and tries too hard to put a human face on an interesting mission by mixing in a love story that doesn’t really fit in any sense.

Emperor has a wonderful pedigree in terms of the filmmakers and source material. Director Peter Webber also directed Hannibal Rising and, more importantly, Girl with a Pearl Earring — a wonderful behind-the-scenes “reconstruction,” if you will, of the events and people involved with the titular painting. Writers Vera Blasi (cowriter of Tortilla Soup and writer of Woman on Top) and David Klass (writer of Kiss the Girls and cowriter of the version of Walking Tall starring The Rock) adapt the Shiro Okamoto novel His Majesty’s Salvation. The movie would have been more successful had it stuck with the interesting military and political aspects of the occupation. Instead, it doesn’t feel at all genuine and really lost my interest at times when it strayed from the mission of the soldiers and ventured into the mission of one man.

Emperor begins with a grand entrance to Tokyo by General Douglas MacArthur (Tommy Lee Jones) in 1945. He’s accompanied by a number of soldiers, including General Bonner Fellers (Matthew Fox) and General Richter (Colin Moy). Fellers is an expert on Japan after spending some time there prior to WWII, and Richter is just a thorn in MacArthur’s side. MacArthur tasks Fellers with gathering evidence to decide whether Emperor Hirohito (Takataro Kataoka in one important scene), considered a living god by his people, should be tried and hanged as a war criminal or allowed to remain free as the ruler of Japan. Even worse, Fellers has just 10 days to provide a report for MacArthur on the guilt of the leader. The investigation by Fellers is the interesting part of the movie. Fellers works his way up the chain of command of the influential and powerful Japanese men in order to compose his report. He reaches Hideki Tojo (Shohei Hino) right after an attempted suicide and also asks Fumimaro Konoe (Masatoshi Nakamura), Koichi Kido (Masato Ibu) and the Emperor’s assistant Teizaburo Sekiya (Isao Natsuyagi) about the Emperor’s involvement in the Pearl Harbor attack and other military decisions.

Were this quest for truth the focus of the movie, I expect that it would have been a great historical drama. The scenes with Fellers and the various interviewees are very tense and emotional as the men refuse to implicate the Emperor or tell Fellers much of anything. The other part of the narrative ruins the drama. It turns out that Fellers met Japanese exchange student Aya Shimada (Eriko Hatsune) at college and fell in love. He later visited Aya where she lived with her uncle General Kajima (Toshiyuki Nishida) and aunt Mitsuko Kajima (Kaori Momoi). Prior to the war, Aya broke ties with Fellers because of the mounting hostilities toward Americans, but he never stopped loving her. Unfortunately for this film, Fellers has an aching in his soul to find out what happened to Aya. Is the alive or dead? Instead of using his assigned driver, Takahashi (Masayoshi Haneda), to keep him safe, Fellers sends him to hunt down clues about Aya while he walks through dangerous parts of the bombed out city. Yeah, that makes sense. Even worse, the narrative bounces back and forth between the investigation by Fellers and the search for Aya, which includes flashbacks of Fellers and Aya in college and chasing each other through a bamboo forest. I’m in full support of love stories when they work, but this one just doesn’t cut it for two reasons: Aya has little charm or personality to attract anyone, and Fellers has a bigger job to do than hunting down an old flame.

Fox is best when Fellers is consumed with the business at hand and not so good in the scenes with Aya. The last time Fox ran around an island looking for the meaning of life in Lost, it ended badly. His search for Aya seems just as fruitless and messes up the pace of the film. I don’t know who cast Jones as MacArthur, but it just comes off as Jones in tan outfits occasionally striking an iconic MacArthur pose. It’s just like every other role he’s played with his Southern accent and gruff approach. There is no attempt at all to look like or sound like the real MacArthur. The Japanese actors are almost all good; the standouts are Nishida and Haneda, who both exhibit convincing emotions. Hatsune is rather lifeless, which ruins any chance of believing the romance.

I can’t speak to the historical accuracy of Emperor. It seems unlikely that Fellers really ran around searching for Aya — if there even was a real Aya — instead of making his mark on history with his report. There’s an entire other movie that could be made of MacArthur’s experiences after Emperor, but it would be best not to use Jones. The finest scene of the movie is MacArthur’s meeting with Hirohito, but there are not enough of those peeks into history to save Emperor from being anything other than a kamikaze attack on moviegoers’ sensibilities.