Matthew Fox stars as a World War II general who walks a tightrope between revenge and justice for Japan’s divine leader in Emperor. 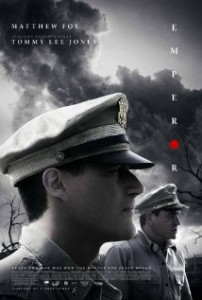 Fox plays Brigadier General Bonner Fellers, a member of General Douglas MacArthur‘s staff. MacArthur is recreated here in commendable fashion by Tommy Lee Jones. The movie literally starts off with a big bang as the war comes to a close. MacArthur, along with his staff, get the unenviable task of helping to rebuild a decimated Japan. The first order of business is to round up those suspected of having committed war crimes. Added to the list is Japan’s beloved (and thought to be a god) Emperor Hirohito.

MacArthur appoints Fellers to take the lead on rounding up any evidence for or against Hirohito and presenting his findings to the General for his final decision on the matter.

This is a story which should have been riveting. There’s a litany of sensitive issues to deal with but in the film they come and go as easily as a summer breeze. How such a major event can be expressed in such a flat manner is a mystery. You never feel any connection or concern for anyone. Fox, as Fellers, does an okay job but looks boyish for the part and isn’t helped by a uniform that usually looks two sizes too large for him.

Then there’s a “major” subplot surrounding Fellers’ old love — a local Japanese girl he lost track of as the war started. This entire story line is unnecessary and dull. We never care for the girl or their relationship as presented and it seems to hint at a deeper story that’s actually rather paper thin. It felt as if the love story was pasted on to try to save an otherwise boring tale. Instead, it makes it worse.

I can’t imagine Fellers’ family being too happy with this representation. He comes off as calculating, potentially traitorous and not very intelligent. The movie deals him one final insult in a closing graphic denoting that General Dwight Eisenhower demoted him to Colonel after the war. This makes it sound like it was personal and, though Eisenhower seems to have had no love for Fellers, the demotion was typical for the time. 212 Generals were similarly reverted. Nothing is mentioned of the fact that, upon retirement, his previous rank was given back.

This man, and his story, deserve a better treatment than what’s been created here.