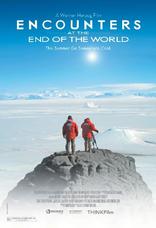 The next movie on my hit list is the documentary Encounters at the End of the World.

This is a movie about life at the South Pole’s McMurdo station. When I say that, I mean it more than you probably take it. The movie touches all aspects of just how boring life can be there and it translates into a bit of a slow movie. The synopsis suggests a lot of stunning visuals and I just didn’t find them here. There are a couple nice shots but nothing I haven’t seen before. The director, Werner Herzog, is famous for this type of film and does a good job here for the most part. He really comes through with some hilarious narration but it’s not enough to make this film a winner. The movie is best when it points out the quirks of the station but then falls flat when it goes beyond that point.

I have to believe that there’s so many more compelling stories and beautiful vistas that could have been utilized for this endeavor but, instead, we get a film that feels more like Herzog just killing time before he gets a better idea. I’ve got little doubt we’ll hear about that production soon enough.