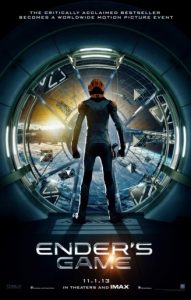 A young boy is chosen to be a top military strategist in a battle to save the future of Earth from the onslaught of an alien race in Ender’s Game.

Orson Scott Card‘s beloved sci-fi best seller is brought to the big screen for the first time. It’s the story of young Ender Wiggin (Asa Butterfield of Hugo) and his journey to help save humanity from the clutches of an alien race bent on our complete destruction. A number of years prior, the Formics — a race of insect-like creatures — attempted to colonize Earth, eradicating all existing life on the planet in the process. That offensive was finally repelled when an unlikely hero — a pilot named Mazer Rackham (Ben Kingsley) — exposed the attackers’ singular fatal flaw. The International Military is now preparing for the inevitable return of the Formics by turning to humanity’s children. Raised on video games, they have an edge over adults both in dexterity and mind-set. They don’t yet fully grasp what it is to risk their lives.

Out of all these children, young Wiggin stands apart from the rest in his raw potential and natural instincts. Ender’s siblings (an older brother and sister) also were originally recruited by the military but ultimately didn’t have the right mix of talents to make the cut. However, Colonel Graff (Harrison Ford) sees something special in the youngest Wiggin and touts him as his choice to become the next savior of mankind. 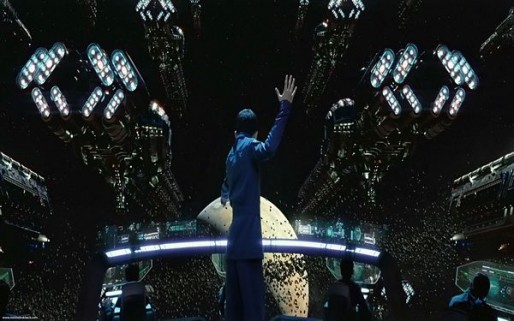 Writer/director Gavin Hood creates a spectacular looking film and does his very best to bring Card’s vision to life but just can’t fit it all neatly into the confined space of a two-hour film. The end result is a story that lacks any character development and feels more like a video game commercial than a fully realized film. Fans of the novel will be deeply disappointed in the breakneck pacing from beginning to end. The beauty of the original is in understanding the morality at the center of the main characters, and that’s just not possible here. The film is forced to ramp up the complexity so quickly that all the essential personality is lost.

The frenetic pace also has a strange side effect of changing the entire scope of the final dialogue between Colonel Graff and Ender. What should have been an emotional, introspective moment for Ender is instead transformed into an obvious and emotionless commentary from Graff.

What’s left are some great special effects, including one shot that’s every bit as iconic as the Death Star explosion in Star Wars and solid acting performances from all. However, none of it can overcome the harshness of the meat cleaver treatment to the original text. We’re left with what feels like a two-hour trailer for the book instead of a cohesive, enthralling tale in its own right.