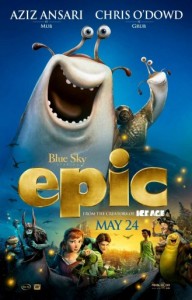 Animated films seem to have fallen into a rut lately where they introduce characters only for the merchandise or otherwise forget that the film’s quality should come first. That’s not to say that they’re bad, but I expect more wonder and excitement from animated films because filmmakers can do so much in them that they can never do in live-action scenes. Epic works on all levels because it was built as a spectacle from the ground up and maintains that sense of wonder throughout. Imagine a combination of the size issues of Honey, I Shrunk the Kids with the exposure to unfamiliar creatures and environments as found in Avatar, and you’ll have some idea of the experience. Epic may not be the best name for this movie. (Don’t confuse it with Epic Movie.) It still completely entertained me and occasionally surprised me.

The people behind Epic are perhaps the reason for its great quality. Director Chris Wedge was also the codirector of Ice Age and Robots, and he provided the voice of Scrat in all of the Ice Age films. This is his first solo directing gig at Blue Sky Studios, the creators of Ice Age and Rio. There are a number of writers on the project with experience as varied as other animated films and TV sitcoms. The film is inspired by The Leaf Men and the Brave Good Bugs by William Joyce, a popular children’s book author and illustrator whose other books led to the equally creative Rise of the Guardians. Boasting top-notch voice talent, Epic details what happens when a disillusioned teenager gets shrunk down to bug size and finds herself in the middle of a battle for control of the forest. Although the struggle may seem like it would only affect things at the smaller size, it instead has repercussions far beyond the forest into the human world.

Mary Katherine (voiced by Amanda Seyfried), or “M.K.” as she likes to be called, arrives to live with her father in a remote house somewhere in New England. Bomba (a manic Jason Sudeikis) is the mad-scientist type who drove M.K.’s mother away with his concentration on research. Bomba thinks that there are tiny creatures in the forest, and he sets up cameras all over the place to try to capture them on video. M.K. can’t get his attention, either, so she’s the next one to leave before she hardly arrives. She follows her three-legged, half-blind dog Ozzy — a perfect canine for an animated film if there ever was one — into the forest and ends up shrunk down to bug size when she’s in the wrong place at the wrong time. The only way that she can return to normal is if she helps the Leaf Men protect a pod that contains the spirit of their next leader before the evil Boggans steal it for themselves.

I was impressed with the voice cast in Epic because they almost all get to ham it up a little and voice memorable characters like Sudeikis does with Bomba. Seyfried plays it straight as the protagonist, and so do Nod (Josh Hutcherson) the young rebel Leaf Man, his general Ronin (Colin Farrell) and their leader, Queen Tara (Beyonce Knowles). The remaining members of the main cast portray off-the-wall characters. Rapper Pitbull voices tough guy frog Bufo, and Christoph Waltz lends his iconic voice to the nefarious Mandrake, leader of the Boggans. I don’t know who made this connection, but Steven Tyler, lead singer of Aerosmith, voices the mystical and jovial Nim Galuu. My favorite characters in Epic are the slug Mub (Aziz Ansari) and his snail friend Grub (Chris O’Dowd). They accompany M.K. on her missions and get all of the best lines, too. At one point, Mub exclaims, “Moist is what we do.” Mub and Grub are as important to Epic and embody the same fun and hilarity as Pumbaa and Timon in The Lion King.

The animation is breathtaking, creative, colorful and detailed from the opening shot to the end credits. All animation studios have the same tools these days, so there’s no excuse for lackluster or even average animation. All films should look as nice as Epic. The most important of the major approaches to the artwork in Epic is the use of layers to imply scale and depth. All of the scenes in the forest made me feel like I was right there with the characters. There was a lot of thought put into the designs of the characters and their costumes, too. The Leaf Men blend into the forest so well that you wouldn’t see them unless you knew they were there. The Boggans wear rats, bats and other animal skins and skeletons as camouflage. The Leaf Men dress in greens, browns and other plantlike colors; the Boggans use grays and blacks for their wardrobe. The level of detail is astonishing as well. A scene with thousands of bats creeped me out as the bats filled the screen. As much I hate the 3D fad/trend/gimmick in today’s theaters, Epic takes full advantage of the technology to immerse you in the experience. In addition to the kinetic scenes of flight and running through the forest, it’s especially fitting to be at M.K.’s size and observe the world from this vantage point. When 3D is done right, it adds to the movie. This is one of those rare cases when I would actually encourage moviegoers to kick in the extra bucks for Epic in 3D.

Epic has a good variety of music to anchor the animation. Danny Elfman provides the score that contains jaunty, adventurous tracks to counterbalance the more serious, ominous sounds suggested by the Boggans and Mandrake. You can’t have Tyler and Knowles in a movie without them contributing at least one song, and that’s exactly what you get with Nim Galuu’s fun “Gonna Be Alright” and “Rise Up” by Knowles over the end credits. Humor surfaces throughout the film, mostly courtesy of Mub and Grub, but there are some gems like the short sequence with a fruit fly and Ozzy’s bumbling nature. Epic might just be one of the sleeper hits of the summer. Regardless of its success at the box office, it’s sure to remind you of the fun and wonder of going to the movies and the power of well-designed animation.