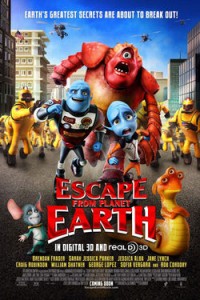 Animated films should be a gold mine for most filmmakers because parents almost blindly drag their kids to these movies as an easy activity for families. Add in those extra 3D dollars, and any company should clean up and at least recoup their production costs. It’s pretty hard to make an awful animated film because so many hours are spent on the animation — traditional or computer generated — that it had better have a good story to drive the enormous effort from the artists. Escape from Planet Earth is one of those other types of animated films that will likely make you wish to escape the theater.

The main problem with this mess of a movie is the lack of material. Cowriter/director Cal Brunker — in his first feature film — and a host of writers credited and uncredited start with a fun premise and then don’t support it with compelling scenes or narrative. Astronaut Scorch Supernova (voiced by Brendan Fraser) is a national hero on the planet Baab that’s populated by blue-skinned aliens. His nerdy brother Gary Supernova (Rob Corddry) is the head of mission control at BASA and warns Scorch against going to the Dark Planet (Earth) to respond to a suspicious SOS. It’s indeed a trap set by General Shanker (William Shatner) at Area 51 to lure aliens from other worlds for their technology to build a massive weapon to destroy planets. Gary has to come to Earth to save Scorch and stop Shanker. That setup lends itself to all kinds of scenarios that weren’t imagined or written by the filmmakers. It’s a crime not to mine a concept of aliens trying to get away from our planet instead of invading it, but that’s what happened here.

A major part of any animated film is the voice talent. Can you imagine Shrek without Eddie Murphy as Donkey or the Toy Story films without Tom Hanks as Woody? In addition to the aforementioned actors, Escape from Planet Earth boasts the involvement of Ricky Gervais, Jessica Alba, Sarah Jessica Parker, Jane Lynch, Craig Robinson, George Lopez, Sofia Vergara, Steve Zahn and Chris Parnell. Unfortunately, their voice work seems lifeless as if Brunker captured the first readings of their lines. If I didn’t know that Fraser plays the main character from the credits and poster, I would have never guessed it was his voice. Similarly, the iconic voices of Shatner and Lynch are subdued to the point of blandness. You don’t hire people like Shatner and Lynch and hold them back. The other actors are recognizable but also seem lifeless and restricted. So far, this film loses on voice work.

Fortunately, the animation is superb. The smooth surfaces and bountiful colors kept me interested visually even if my ears and brain weren’t engaged. The blue aliens from Baab are cute and kind of quirky. The aliens stuck in Area 51 are a visual treat as well. Lopez, Robinson and Lynch are three aliens who befriend Gary, and they’re as different as aliens can be. Thurman (Lopez) is a red, slimy worm. Big-eared Doc (Robinson) looks a little too much like a Mogwai. Io (Lynch) is a giant one-eyed red beast who’s sensitive to only having that one peeper. Yes, there are Roswell-type gray aliens and other kinds in the background, so there’s plenty to look at here.

Sadly, the bad outweighs the good, and this is not a movie that I would recommend. It would fit in fine as a diversionary Saturday morning cartoon, but as a feature film, it’s a bit of a rip-off. You probably won’t see any of the voice actors on talk shows promoting it because it’s pretty much DOA at the box office. You know you’re in trouble when Gervais is the most identifiable voice and his character is relegated to a ship’s computer.