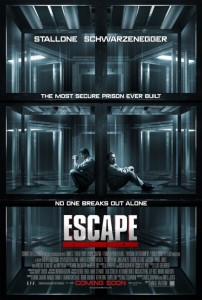 A high-tech prison break professional takes on his latest client only to find out that, this time, it’s not just another job in Escape Plan.

Ray Breslin (Sylvester Stallone) is a dour security expert who literally wrote the book on breaking out of prisons. His company gets him set up with an alias fit for a con and sends him inside to begin the process of finding a way out. If he gets into real trouble, there’s a special code he can share with the warden to assure his freedom and safety. Then one day, the CIA comes calling. They’re looking for Breslin to kick the tires of a whole new prison designed for the kinds of prisoners no country wants to even admit to having locked up. What Ray doesn’t know is that this is all an elaborate ruse set up by an unknown enemy that wants him put away forever. Things really get dicey when Ray finds himself locked up in a facility unlike anything he’s ever encountered before.

This film is another action star team-up of Stallone and Arnold Schwarzenegger, who plays fellow inmate Emil Rottmayer. This immediately had me thinking of past aging buddy pictures like The Odd Couple (with Walter Matthau and Jack Lemmon) and Tough Guys (with Burt Lancaster and Kirk Douglas).

Unfortunately, we get a totally preposterous, pulseless, pitiful film that has nothing even remotely in common with those other classics. From the very first frames, the story is just beyond belief. Scene after scene, we get one idiotic, impossible moment after another. 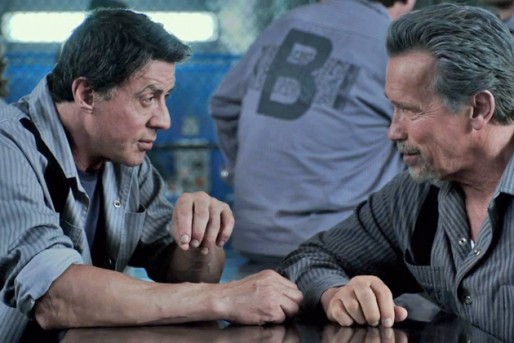 The characters are entirely undeveloped but tossed at us like we’ve known them all for our whole lives. This is further compounded by horrid acting in a vehicle that feels like a bad TV pilot. You know you’re in trouble when the only decent acting in the entire film comes from Schwarzenegger. Stallone looks and acts tired. Amy Ryan as one of Stallone’s coworkers seems entirely in over her head, but the real raspberry goes to Stallone’s business partner, played by Vincent D’Onofrio. The only excuse I can come up with for his oddball performance involves a deep flask and lots of time off camera. I’m not even sure that he knew that the cameras were running.

What the film wanted most of all was to not take itself too seriously, and it couldn’t even manage that. Had this movie played up the camp and given us some nice comedic moments, it just might have gotten a reprieve, but as it is, the audience ends up with the only full sentence here.