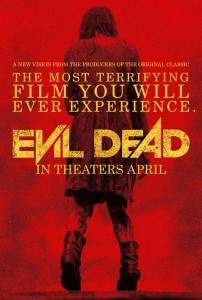 A group of young friends head to an old family cabin and unwittingly unleash Hell itself into their midst in the remake of the 1981 cult classic Evil Dead.

The original Evil Dead is considered one of the classic films of ’80s horror. Today it looks like the epitome of campy with outrageous discount Halloween-like costumes and gore effects. No one would confuse it for an Oscar contender. It was, however, scary in its day and that’s what I expect from a decent horror film.

The 2013 remake connects many elements of the original film and improves dramatically on all the previous technical limitations providing the right ingredients for a good ole scary movie. The plot is very similar to the original. Five friends head out to a remote cabin for a getaway whose main purpose is to help one of them break a bad drug addiction. One of the friends finds a strange book and, without considering the consequences, starts reading from it setting free a soul-eating demon intent on killing everyone in the house. As I said, Hemingway it’s not.

I’ve already seen reviews calling the story ridiculous and tearing it apart in ways beyond what even original writer/director Sam Raimi employs in the film. As I said, you have to think about the intent of the movie and its intent is to make the hairs on the back of your neck stand up. Mine were at absolute full attention from start to finish. There were a few times I felt I really couldn’t even look any longer. Is the story ridiculous? No question about it. It’s as brain-dead as any zombie but did it scare me? You betcha. The tension in the theater could be cut with a bloody knife. A room full of 20-somethings sat silent as the tension mounted. Barely a cell phone could be seen (which in and of itself would be enough to scare anyone under 25).

The film includes a surprising number of images that are, for lack of a better phrase, burned into my very soul. It employs a number of old tricks to keep the heat on but, old or not, they still work. You’ll find lots of claustrophobic close-ups and a score that drives home every sharp point. Lighting (or the lack-thereof) acts like another unseen evil character.

As a follow-up to the original this one hits the mark. The only area it could have improved on, but didn’t, is the script. It could have been a great film if some time had been taken to really give us a believable story. That’s a lofty goal for a movie that doesn’t care about anything other than getting backsides into seats. That’s a possession this haunting presence will have no trouble pulling off.