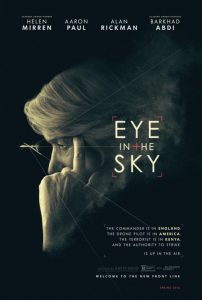 A mission to take out several top terrorists turns into a moral tug-of-war over the potential for collateral damage in Eye in the Sky.

A group of sought-after extremists in Nairobi come together for what they believe is a clandestine meeting. Little do they know that their every move is being captured and scrutinized by a joint British and American security force. The latter is under the direct command of British Colonel Katherine Powell (Helen Mirren). She calls the shots for the entire operation from her command center in Sussex, England. The view of the action comes from two sources — a high-altitude drone flying above the terrorists and tiny bug-sized drones controlled by ground troops near the bad guys. American pilot Steve Watts (Aaron Paul) directs the aerial drone from Creech Air Force Base in far-off Nevada. The whole mission is overseen by Lieutenant General Frank Benson (Alan Rickman in his last live-action role) and several top UK politicians in a conference room in London. If the potential for telecommuting ever needed a commercial, this is it.

The initial mission unexpectedly takes on higher priority when Powell and the ground troops realize that they’re dealing with a far more explosive situation than they anticipated. Powell alerts Watts to prepare for a targeted missile attack and reaches out to Benson to get approval for the strike. Everyone quickly agrees until the target zone is compromised by civilians who could easily end up as unwanted collateral damage. This new twist causes everyone involved to have to resolve the delicate balance between morality and mission.

This chess-like pressure cooker has the underpinnings of a winning tale. There’s just one problem: the thrust of the story’s main point is patently implausible. I would absolutely love to believe that military commanders and their political leaders experience this much angst before approving a mission. It’s just entirely contrary to what history tells us.

The real collateral damage is the writing. Everything has to be taken to the extreme. Every character is given a single mind-set. Powell wants blood. Watts wants to play Pac-Man, and Benson might as well spend the entire film looking at his watch wondering if it’s time to go home yet. It wouldn’t be quite so distracting if every challenge they face didn’t feel completely contrived.  I spent much of the film wishing that I could reach out and slap them all back into reality.

If you can put all that out of your mind, there is enough tension to keep you mildly engaged throughout. I just wish that Rickman could have had a send-off more worthy of his talents. 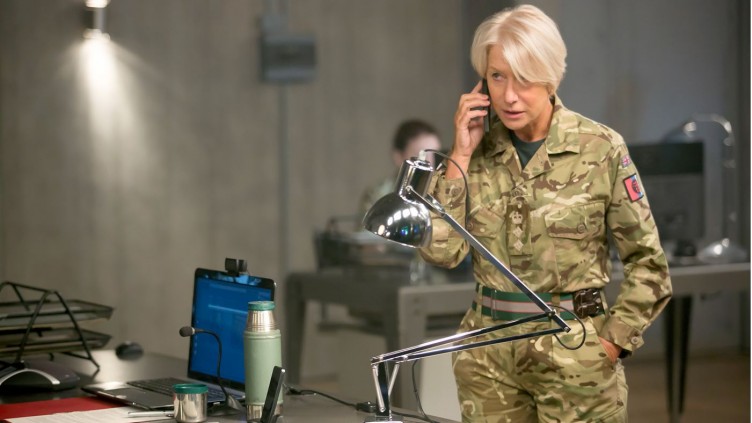