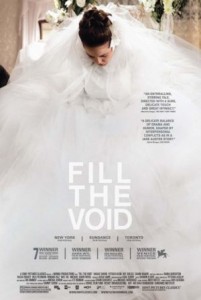 I love movies that take me someplace that I will never go or introduce a lifestyle that is markedly foreign because I can take that journey from the comfort of a theater seat. Fill the Void is that type of movie because it sets things firmly in an ultra-Orthodox community in Tel Aviv for a familiar and predictable story that is still interesting in the implementation. I don’t know any Hasidic Jews, and if I did, this film might feel less foreign, I suppose. Its original title is Lemale et ha’halal, and it was the submission of Israel for the 85th Academy Awards this year. It didn’t win an Oscar, but that exposure may have made it more widely available so that I had the opportunity to see it. Fill the Void is ultimately about family and tradition and how those two forces conflict with the hopes and dreams of a young lady.

Writer/director Rama Burshtein was born in the United States but grew up in Israel in a non-Orthodox home before later embracing traditional Judaism, so she has a different perspective of religion and life in Israel. As a filmmaker, she shows the many details of the lives and devotion of the characters. The film begins with something familiar as women scope out a potential mate for a daughter in a grocery store before switching to a Purim tradition of people in need receiving gifts and offering prayers of thanks. That contrast or mash-up of what you might expect from characters and how they go about their lives in this community is exactly the strength of the film that captivated me for its 90 minutes. I never felt outside the events; instead, I was welcomed inside like a silent observer.

Shira (the subtly beautiful Hadas Yaron) is 18 years old and being prepped for marriage to a rather nebbishy young man who nonetheless will make a good husband and provider. Her two sisters are in completely different situations. Esther (Renana Raz) is married to Yochay (Yiftach Klein) and about to give birth. Frieda (Hila Feldman) is a spinster who desperately wants to find a man — certainly before Shira — so that she doesn’t end up like the armless Aunt Hanna (Razia Israeli), the physical embodiment of an undesirable woman. When Esther dies in childbirth, Yochay is left with a dilemma. He needs a wife to help raise his child, and the most suitable candidate is in Belgium. Yochay doesn’t want to move away from his wife’s family.

Shira’s mother Rivka (Irit Sheleg) sets in motion a plan to keep her grandchild close by when she suggests to Shira that she marry Yochay and, thus, take the place of her sister as the title suggests. What’s a young lady to do? Shira feels like her life has been uprooted after also experiencing the grief and loss of her sister. She’s certainly a good match for Yochay and a wonderful aunt to the newborn who soothes it with her accordion playing. Shira’s father Aharon (Chayim Sharir) is an important man in the community, but it’s clear that the women are really pulling all of the strings here. There’s really no doubt what’s going to happen in the film. It’s an interesting melodrama that plays out as expected and draws you in with the emotions and details. It’s an unusual feeling to hope that Shira finds true happiness when, in fact, everything seems to be conspiring against her wishes and dreams. Why should she have to change her plans just because her sister died? Would things be different if Esther died without leaving a child behind? Perhaps. Here’s a plot that could morph into a wildly different film if brought to our society. Imagine Kim Kardashian dying in childbirth and one of the other Kardashian sisters marrying Kanye West to raise their child. Bring on the reality series!

Fill the Void proves how important female filmmakers are to the business and how their perspectives sometimes deliver quite thought-provoking films. This story in the hands of a male writer/director might have focused more on Yochay than Shira. Fill the Void is rated PG, so there is nothing objectionable here. Usually a curse for a film, this rating and the subject matter will likely open up the film to a wider audience than the typical children’s movie that gets a PG rating. The costumes are as important to the setting as the traditions. I’ve seen movies with Orthodox characters before, but the elaborate hats and other enhancements for the men and the simple white clothes of the women establish a uniform look that envelops the characters. There is little or no makeup for the women; still, Yaron’s looks stand out as you might expect for the lead actress. The acting is quite natural, so I wonder how many of the performers have real-world experience with Orthodox practices. Fill the Void won’t surprise you with plot twists or story development. Instead, the setting and simplicity of the timeless story mark it as a worthwhile film when you want to try something a little different.