A young Hasidic Israeli girl has to balance her dreams and desires against the pressures of her family and faith in Fill the Void. This is the film that represented the country at this year’s Academy Awards for Best Foreign Film — though it didn’t win. 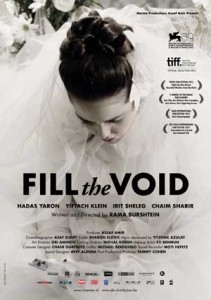 The film is written by Rama Burshtein, a native New York Jewish woman who became more religious as she approached young adulthood and moved to Israel. The interesting part of this is that the very film she wrote pretty much cannot be seen by the culture written about. The charedi community (the group highlighted in the film) is considered ultra orthodox, and their beliefs effectively negate either sex from being able to see the film. Men aren’t allowed to see women performing as it might get them thinking about women other than their wives, and the women shouldn’t be seeing men in such light. It’s all a bit convoluted.

Essentially, the film revolves around the life of Shira (Hadas Yaron), an 18-year-old charedi girl with marriage on her mind. The only problem is that her male suitor has decided to choose someone else. Then, suddenly, her older sister dies in childbirth, leaving her brother-in-law without a mother for the newborn. This causes him to immediately look for a new wife but the small community means he’s got to consider options from all over the world. The only viable choice would require him to move to Belgium. That doesn’t sit at all well with Shira’s mother, who can’t fathom the idea of her grandson being brought up that far away. She decides that the only acceptable solution is to offer up Shira as his new wife. Of course, this doesn’t exactly strike Shira as the best answer.

However, as a good charedi daughter, she vacillates endlessly between her own desires and the responsibilities of her faith and family.

That’s the basic story, and there’s not much more to it other than the realism portrayed in this somewhat common occurrence in the community. The problem is that it’s a boring story filled with lots of symbolism that’s supposed to stoke up great discussion but that just doesn’t make a lot of sense. The biggest example of this is Shira’s aunt. She’s a spinster who happens to have no arms. The suggestion is that she’s deformed as an unmarried woman, but of course, the reverse can also be construed — she has no arms and is therefore less desirable to a male suitor.

The point is the film wields its messages with a large sledgehammer that isn’t necessary. We get it.

It’s also extremely frustrating. The limitations of their faith get in the way at every turn. This one can’t talk to that one and vice versa. It’s like watching an entire group of people try to tie their shoelaces with pliers and knowing you can’t tell them they can do the same  thing in seconds by just using their fingers. A simple conversation between everyone would have resolved the movie in 10 minutes.

An oddity was that the men in the audience laughed at several scenes while the women didn’t. Oops. Good luck with that discussion at home later. However, my biggest issue with the film is that the plot is blatantly obvious. Nothing in it comes as a surprise, and you know the outcome as soon as the setup is complete. The rest is just good acting for sure, but that’s not enough to make it worthwhile.