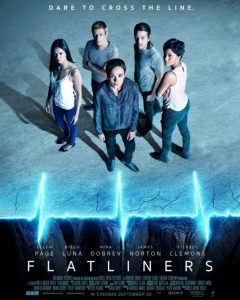 The Who sang, “I hope I die before I get old” in “My Generation.” Fortunately, that didn’t happen to me (or half of The Who), and I’m now alive long enough to see movies from my youth remade for a new generation. I don’t find any of them really necessary. After all, most of us would rather have new experiences than rehashed old ones. That said, this peek into the past survived the trip much better than others. The obvious life support jokes don’t apply this time. Flatliners revisits a familiar thriller and jolted me often enough to keep me awake and interested.

I completely credit the success of this project with the filmmakers and their distinct vision on how to resuscitate the original. Director Niels Arden Oplev most notably helmed the 2010 version of The Girl with the Dragon Tattoo and introduced the world to the fabulous Noomi Rapace as Lisbeth Salander. I only wish that he had completed the trilogy. Perhaps Flatliners may be a kickstart to his film career. Writer Ben Ripley also penned the creative Source Code. The story follows ambitious Toronto medical student Courtney (Ellen Page) and her fascination for the hereafter. When she wants to see for herself what happens after death, fellow students Ray (Diego Luna), Marlo (Nina Dobrev), Jamie (James Norton) and Sophia (Kiersey Clemons) assist her in dying and then bring her back to life. After Courtney’s transformation and heightened skills upon her return to life, the others want to try the same experiment. When hallucinations and nightmares plague the friends, they have to find a way to make them stop.

I feel like it’s forever since I’ve seen Page, but it was really only a couple of years ago with 2015’s Freeheld. Her performance reminds me of why I like her demeanor and ease of inhabiting her characters. Luna abandons his normal charm and smile as the voice of reason in the group. Dobrev of The Vampire Diaries and Norton endure some of the more violent aftereffects of their characters’ journeys, so kudos to them for their work. I’m most impressed with Clemons because she lights up the screen with every scene and breaks your heart when she undergoes some serious stuff. This cast of varied personalities and energies reflects the similar chemistry of the original film’s actors.

Indeed, this remake calls to mind the source material in a good way because both concentrate on the humanity and souls of the characters as they try to right some wrongs in their life in order to move forward. 1990 introduced the compelling supernatural films Flatliners, Jacob’s Ladder and Ghost. Watching this movie took me back mentally to those times in the theater, and you can get away with a lot of such hocus-pocus if you connect to the characters. Kiefer Sutherland appears as adviser and teacher Dr. Barry Wolfson. It was a missed opportunity to not involve him more, especially if the filmmakers pursued this as a sequel with Sutherland reprising his role from the original.

Flatliners plays with a strange mixture of drama, horror and sci-fi and skillfully bounces between these genres. The science behind the kill-me-then-revive-me procedure would probably make most doctors laugh, even if medically possible. Human beings have always wondered what comes next after death, and the plot toys with that eternal question in an unusual way. Terror also weighs heavily as the characters see their own demons alive and actively haunting them. Oplev’s approach to these visions kept me on the edge of my seat, yet he also sparked that feeling of wonder as Courtney floats above the medical school campus and Jamie speeds along on his motorcycle without any fear.

Some missteps keep this film from a higher plane of existence. The lush apartments and living conditions belie the realities of medical students burdened with debt. The characters follow the complete steps for flatlining and reviving the first time, but then they somehow get sloppier with each successive attempt. Cheating death simply can’t be taken lightly. I hope that the hereafter doesn’t bear any resemblance to the scenes in Flatliners. Instead, I’m happy to just sit back and watch such representations on this side of the veil of death. 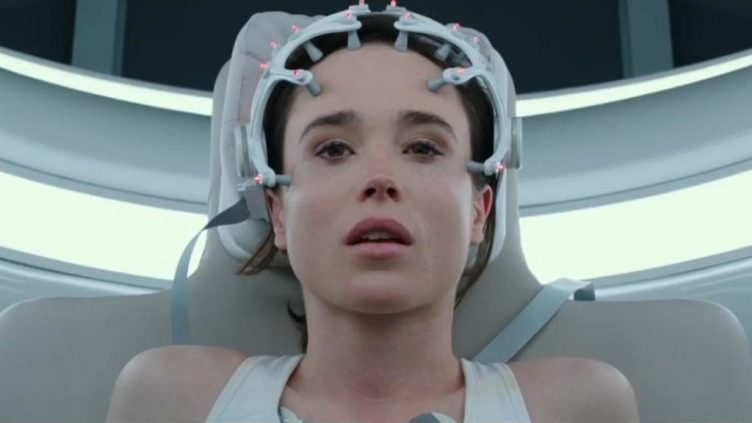