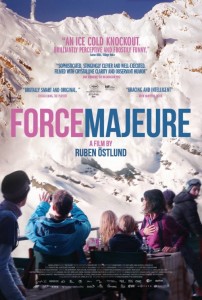 An avalanche at a French ski resort threatens to bury a family’s future in Force Majeure.

Would you take a bullet for your spouse? Would you hang precariously from a ledge in an attempt to pull your child to safety? Would you stay behind in a fire to make sure that everyone else gets out alive? Most of us believe that, in a real emergency, we’d have the strength of character to be heroic. Thankfully, it’s a question that most of us never truly encounter. We get to believe the story that we tell ourselves simply out of a lack of any evidence to the contrary.

Tomas (Johannes Bah Kuhnke) and his wife Ebba (Lisa Loven Kongsli) have every reason to believe that they’d be strong in a crisis. They’re young, strong and athletic. They have two young children whom they adore. Of course, they’d do everything possible to protect each other and all that they’ve built together.

Their latest excursion finds the family nestled in the picturesque French Alps for an intimate ski vacation surrounded by breathtaking vistas and perfectly groomed snow. Early one afternoon, they all gather for lunch on a balcony that sits just above the base of an imposing mountain wall. This afternoon, the resort is engaged in a normal part of its daily safety regimen. It fires off preset explosions designed to keep small snowbanks from building up into something more menacing. Lucky diners on the balcony get to watch falling snow majestically roll down toward them. However, something is amiss this day. The snow only seems to grow in both size and danger. As it closes in on the balcony, unsure guests suddenly stop snapping pictures and quickly begin to panic. Almost instantly, everyone is surrounded by a wall of white. The light that slowly breaks through the icy haze illuminates deep, dark recesses of a family dynamic that none of them ever had to confront. The questions that remain threaten to destroy the family with the same efficacy of any would-be avalanche. 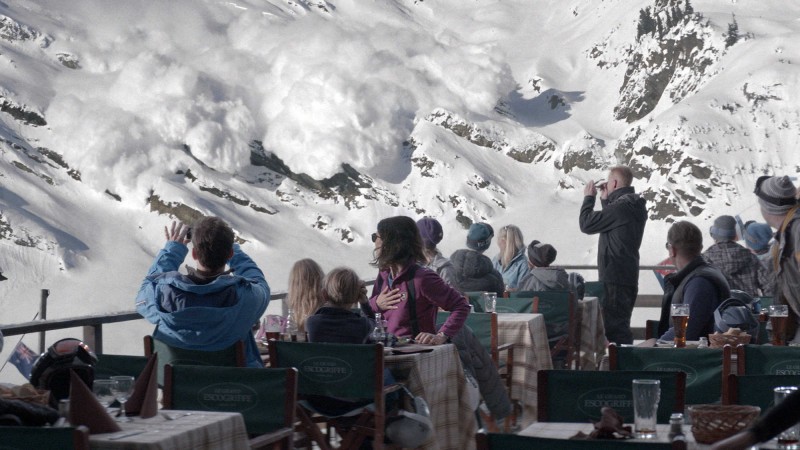 This curious little Swedish film is every bit as hard to pin down as the snow we see escaping down the French Alps. It has an artistic, campy comedy style that remains throughout while the rest of plot transforms from a surging thriller into a slow-burning drama. As expected, the visuals are both incredible and enveloping. The chilly exterior shots naturally infuse the audience with a sense of discomfort. We feel nearly as wet and cold as the characters. The imposing darkness of winter nights only deepens the effect.

The challenge of the film for many will be to hang in as it moves from high gear into low. Along the way, we get a number of very strange everyday-life shots that serve little purpose. We watch as the family sleeps, shaves and even brushes their teeth. There’s one long shot that seems to exist for no other reason than to show us the coolest urinal that I’ve ever seen. Other sequences are nearly as baffling and often much longer.

The dramatic sequences really make an impact, and once they take root, the distractions are, for the most part, thankfully pushed into the background. From then on in, it’s a bit dialogue heavy but often riveting. We watch the implications grow with the same ferocity and gloom as the avalanche that came before. This is not a film for any couple on insecure footing or, God forbid, a first date. The haunting nature of its final premise is one that may cause even the most committed partner to raise a questioning eyebrow — one to which none of us want to have to respond.