A heart-broken musician heads to Hawaii to escape his breakup in Forgetting Sarah Marshall.

Let me say right now that my least favorite part of this movie is its title. It’s the most forgettable part of the film. 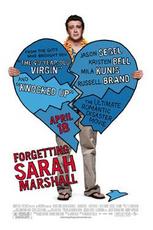 The story comes to us from it’s lead actor Jason Segel who we’ve seen in lesser roles in previous recent comedies. Segel’s character is a somewhat average guy who just happens to be the longtime boyfriend of an attractive, well-known TV star. The story starts five years into their relationship just as the girlfriend, played wonderfully by Kristen Bell, has decided to call it quits.

The main thrust of the story is, as the title suggests, a story about coping with the sudden world-change that comes with breaking up. Typical Hollywood coincidence dictates that both characters end up in the same hotel in Hawaii without planning to have it happen that way.

Segel’s character meets a charming girl played by Mila Kunis who sees his pain and sympathizes. Of course they grow closer and the complexity grows.

So many of these types of films insist on matching everyday (and usually geeky) guys with drop-dead gorgeous women as if that’s an everyday occurrence. The one casting issue I have here is with Kunis. She is stunning from every angle but it’s just a distraction here. It’s not that she did a bad job. Quite the contrary. The story would have, in my view, been far more plausible and effective if the role were played by someone like, for example, Janeane Garofalo. It’s harder to feel the angst when a character is torn up about two fairly similar model-type actresses than it would be to have one of them play the girl-next door, better-for-you role.

One of the best, and a bit surprising casting choices was the role played by Paul Rudd. It took me a few moments to realize it was even Rudd in the first place. He turns in a brilliant performance as a drugged-out surfing instructor who seems unsure of what his own name is let alone the state of anything else in his world.

The movie is also peppered throughout with a myriad of character roles that impress time and again.

One word about the early press on this movie. Much is being said about a an early scene that exposes every inch of the lead actor’s genitals. It shouldn’t be a topic of conversation. While it is a bit of a shocking moment, it’s only because it so rarely happens in Hollywood films. Here I suspect it’s done for comedic effect and, to be frank, it really wasn’t necessary. I believe it was left in just to generate some level of controversy.

“Forgetting” is a very solid picture that does exactly what it sets out to do. It’s not quite as funny as some other Judd Apatow comedies (he’s a producer on this one), but it’s not too far off either.