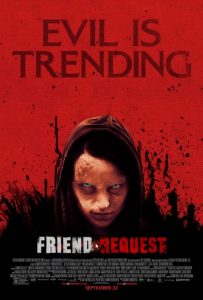 Technology often gets murdered by filmmakers. Although I still find it annoyingly inauthentic, I have come to accept characters only furiously typing at keyboards to make magical computer things happen rather than looking at the screen or using a mouse. Additionally, how is it that facial recognition software has advanced so quickly in ability and speed that cops can pick out a suspect by scanning every single traffic camera in a city in seconds? Of course, we all accepted a little girl going into a television screen in Poltergeist and coming out of one in The Ring. When modern technology becomes mangled so badly that it takes you out of the experience, the filmmakers have completely failed. Friend Request will likely never appear on a list of your suggested movies, but if it does, dismiss it immediately before it infects your mind.

I realize that film titles may all sound a bit too familiar these days, and this one made me dig deeper to confirm that my memory wasn’t fried. There have been three other similar movie titles and one short film, all of which deal with supernatural forces or horror. Two of the feature films — one from 2013 and one from India in 2015 — and one short film from this year all have the title Friend Request, and 2015’s Unfriended completes that collection. However, I would recommend the 2012 comedic short Friend Request Pending that stars Judi Dench. When represented properly, the technology around us can drive a good movie, even if it tends toward silliness. 1988’s You’ve Got Mail took its name from a popular greeting on AOL (America Online), and 1989’s 976-EVIL came out when 976 phone numbers were all the rage. Neither of these titles will mean anything to younger moviegoers. Instead, their generation has such dreck as Friend Request.

The filmmakers don’t have any significant relevant credits to their names, and this project won’t do much to help their résumés. Writer/director Simon Verhoeven has extensive acting credits, and he should perhaps stick to that end of the move industry. Cowriters Matthew Ballen and Philip Koch must share the blame for this nonsense. Although the premise hints at a modern version of Fatal Attraction with friendship replacing intimacy, the result takes a decidedly supernatural turn. Laura Woodson (Alycia Debnam-Carey of Fear the Walking Dead) ranks as one of the more popular young ladies at her college. With a boyfriend and close friends, she has it all. When the strange, quiet Marina (Liesl Ahlers) from one of her classes sends her the titular request, Laura accepts it to try to be nice. Unfortunately, Marina is one of those possessive types. When Laura blows off Marina to be with her real friends and then later unfriends Marina after she publicly confronts her, Marina kills herself — not a spoiler because the movie starts with that knowledge — and somehow strikes back at Laura and her friends from beyond the veil of death.

The only thing that Friend Request has going for it is the cast. They all take this stuff seriously, and that’s more power to them for earning a paycheck. Debnam-Carey does a phenomenal job on Fear the Walking Dead, so this outing doesn’t touch upon her true abilities. Instead, this big feature film for her trades upon her familiarity to horror fans and doesn’t deliver the goods, despite another chance to hear the Aussie actress’s great American accent. South African actress Ahlers — the film was shot in Cape Town — shows the most potential in the cast, and I hope to see her in other projects that make it here to America. The other young actors who play Laura’s boyfriend and friends come off as believable, and I was also impressed by Shashawnee Hall as a detective.

Although delivered as horror, there isn’t much to cause chills other than some creepy videos that Marina shot and characters going down spooky passages. The real horror lies in the ridiculous plot points that you’re meant to accept. I don’t recall exactly what caused my reaction, but at some point a third of the way in, I went binary on Friend Request and just turned off to the on-screen events. It’s no wonder that Facebook wanted nothing to do with this crap despite many of the look-alike interface screens. In contrast, AOL embraced You’ve Got Mail. I’ll give you just a few of the stupid elements. Strange videos appear on Laura’s timeline, and nobody can delete her account back at the company. Huh?! One friend brings up the supporting code for the Facebook-like program, and oh my God, it switches from regular text to ancient symbols. You’re supposed to believe that cell phone reception happens underground and that battery life lasts much longer than any battery’s expected duration. Modern printers have safeguards against spitting out black pages, but the evil one in this movie generates them long after the ink would be gone. Why is it that hospitals in horror movies are always deserted? It makes no sense.

I didn’t expect much, but I experienced so much worse. It’s no surprise that I was the only one in the theater. Even loud hecklers who sometimes ruin horror movies would have been welcome. At this time of year, you can expect films all along the spectrum of horror. Friend Request not only ranks at the low end of that list, but it’s probably my worst overall movie of the year. The lessons of this film are to not accept friend requests from people whom you don’t know in the real world and to be even more suspicious of plots that depend so heavily on social media.