The movie of the week is Funny Games. It stars Naomi Watts and Tim Roth. Basically it’s a story about a typical well-to-do family that ends up tormented by two roving psychopaths. 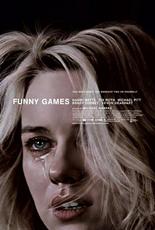 The movie had its moments. The psychos are very original. Unlike any others you’ve most likely seen in any movie. They’re so grating that you want to reach up into the screen and wring their necks almost from their first appearance on screen. Fans will tell you that’s a good thing.

However, the movie is a waste of time. Don’t bother seeing this, renting this or watching it on cable. It will trick you by coming up with something interesting every so often to keep you going until you’ve passed the point of no return and then it’ll just disappoint.

The movie starts off well enough with a couple of eerie scenes giving you the impression that it’s going to turn up the heat. Then, it treats you to a family of three being held at bay by two frail kids who wield a graphite shaft driver as their only weapon. Oh, don’t miss, just before this, Tim Roth’s character getting nominated for the award of worst husband on the planet.

The entire middle of the film is completely and utterly implausible and yet it doesn’t start there. There are countless missteps along the way. The victims know what’s going to happen, but they don’t do anything constructive. They waste time. They reminisce. They eat bread. At this point you want to reach out and strangle them. Fans will tell you this is a good thing.

Then there’s a whole scene with a remote that should be shown to all students of filmmaking as an example of how to completely destroy any respect you might have earned up to that point.

Needless to say, the ending is totally without merit as well. Don’t get me wrong—I don’t need a typical Hollywood ending but this was just ludicrous. Fans will tell you this is a good thing.

The worst part about it is that the movie had some elements that really could have shined with the right, logical storyline. As it is, it’s a complete disaster of a movie. It’ll be hard for this not to be in the running for the worst movie I’ll see this year and it’s only March. And of course, fans will tell you this is a good thing.