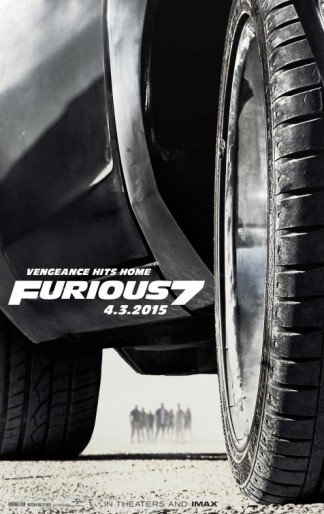 Many movie franchises peter out over time to become pale reflections of what made them good at the beginning. I would have laughed if someone ever suggested that Jason Voorhees of the Friday the 13th series would end up in space or that the titular character of the Leprechaun movies would rap in a bar. Sadly, both came to pass. Fortunately, the fate of the series that began with The Fast and the Furious is much more positive. What started out as a crime investigation in the illegal car racing circuits has blossomed into blockbusters that culminate in the latest entry. I expected a sobering experience given the death of star Paul Walker in the midst of filming. Instead, Furious 7 mixes familiar faces, impressive fight scenes, new characters, impossible stunts and a respectful tribute to Walker and his character for the ultimate film for fans and newcomers alike.

Like the cars that are the center of the franchise, the plots have changed in complexity over the years. Furious 7 mostly reminded me of a James Bond film in scope, locations around the world (Los Angeles, Azerbaijan, etc.), beautiful women and over-the-top bad guys. Director James Wan (Saw, Insidious and The Conjuring) meshes well with returning writer Chris Morgan, who penned the last four movies. The core characters are back, including Dominic Toretto (Vin Diesel) and Brian O’Conner (Walker) as the central duo of a crew that includes Letty Ortiz (Michelle Rodriguez), Roman Pearce (Tyrese Gibson) and Tej Parker (Chris “Ludacris” Bridges). Dwayne Johnson returns as covert agent Luke Hobbs, but he has a smaller role in order to make room for newcomers. A former enemy’s brother, Deckard Shaw (Jason Statham), comes after the team for vengeance, and in the process of defending against him, they all become embroiled in a struggle for a high-tech device called God’s Eye between a government operative (Kurt Russell) and an international terrorist (Djimon Hounsou). Furious 7 ups the ante by adding legendary movie fighter Tony Jaa and real-world champion Ronda Rousey, who similarly made The Expendables 3 better with her scenes.

Fight sequences are as much a part of the fabric of this movie as races and stunts. Statham is such a badass that I expected nothing short of fireworks in his fight scenes with Johnson and Diesel. Rodriguez showed off her fighting skills in Fast & Furious 6, so this actress whose first role was in Girlfight holds her own against Rousey — in heels, no less. I expected more of a showcase for Jaa’s moves here in an American movie. Look at his work in the Ong-bak series or The Protector, then pick your jaw up off the ground. Wan makes some of these scenes especially memorable by playing with the camera angles and movements as well as guiding the action of the stars themselves. When Johnson and Statham fall or tumble, the camera goes right along with them as if connected, and this creates more fluid action. If the human warriors aren’t enough, some of the vehicles also get in tussles as the drivers use them as weapons. Furious 7 constantly keeps you guessing.

After the elaborate but physically impossible airplane sequence in the previous film, I would have never expected to see something even more outrageous but totally entertaining. Furious 7 is packed with such scenes from start to finish. The trailer ruins some of these moments, so avoid it if possible. To continue my Bond comparison, I almost never shake my head so much in disbelief at what I’m watching on screen as in a James Bond movie. Furious 7 rises to that challenge. When Brian explains that “Cars don’t fly” to his son early in the movie, you just know that the filmmakers will try to disprove that comment. I was impressed by even the ideas behind the stunts, let alone the actual implementation of them in the real world or some combination of real cars and computer graphics. Tom Cruise may have made headlines while hanging from a tall building in the last Mission: Impossible movie. I guarantee that you’ll forget about that altitudinous stunt when you see Furious 7. Just prepare to suspend all disbelief when you enter the theater.

I would be shirking my duties if I didn’t address the elephant in the room. It’s a pretty dumb way to die in a speeding car, especially if you’re one of the stars of this series, but that’s a debate for another time. With today’s technology, there are more options to finish a film when a lead actor dies during production, unlike the time when John Candy left the producers of Wagons East! in a predicament by having a heart attack. For Furious 7, Walker’s brothers Caleb Walker and Cody Walker stood in for their brother, and special effects were used as necessary. We don’t spoil movies here, but I think some reassurance is needed. I expected a lot of melodrama or sadness in Furious 7, and I’m happy to say that the film doesn’t head in that direction. There’s instead a nice tribute to Walker and his character Brian that left me smiling and appreciative of the way that they handled it. 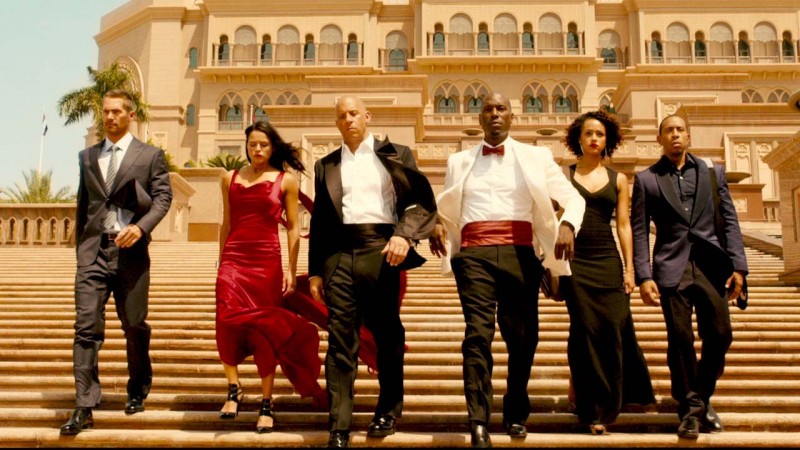 This sentiment and the concept of family are especially strong in Furious 7, and the seeds of this message are there all the way back in the first movie. Early in Furious 7, Dominic underlines this theme when he says, “What’s real is family.” Brian has a toddler, Luke’s niece hangs around and Deckard has come to America to avenge the attack on his brother. Dominic includes his team as part of his family, so their support of each other is as strong as the blood ties. Fans of the series will enjoy some character cameos from past films, so keep your eyes open for familiar faces. This spirit of brotherhood is also matched by the amount of humor and number of one-liners. The banter between Gibson and Bridges is infectious. I do have to take issue with one line. Luke exclaims, “Woman, I am the Calvary [sic].” My ears hurt when I heard words like that, “ask” or “mischievous” mispronounced, and Johnson repeated this mistake on a recent episode of Ellen: The Ellen DeGeneres Show. If that’s my only complaint, they did a great job.

Furious 7 is big and loud, so I would recommend seeing it on an IMAX screen if you get a chance. It doesn’t happen often, but they even developed special themed IMAX animation before the feature. The music by Brian Tyler and soundtrack songs keep the blood flowing, especially during a club scene in Abu Dhabi. There are a surprising number of scenes that recall other flicks like Indiana Jones and the Temple of Doom, Gladiator, Return of the Jedi and Live Free or Die Hard. This is part of the joy of watching Furious 7, even if the series still can’t keep the naming convention straight. (The title card in the movie spells out “Seven” instead of using a number.) Furious 7 kicks off the packed summer schedule a little early, and if this turns out to be the last movie of the franchise, it goes out in style. I drove a little fast after the screening, but I fortunately didn’t try any stunts other than putting on my seat belt without twisting it.