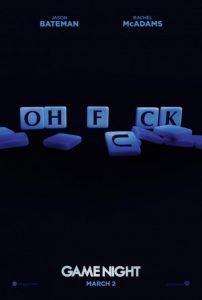 There’s a foolproof way to always win at Monopoly, but it’s sure to tick off your friends. It boils down to buying up as many properties as quickly as possible, building houses on them and never turning them into hotels. With a limited number of houses available, you quickly shut out the other players from making money. Strategy like that — winning trumps camaraderie — might be in the repertoire of the lead characters of the new adult comedy Game Night. Depending on your sense of humor, you could either go along for the ride or throw in the towel. You will certainly remember at least one scene. Game Night doubles down on the shock factor as a group of friends commits to their competition and tries to survive the night.

The filmmakers don’t have a lot of credits on their résumés, so it’s a great achievement that Game Night turned out so well. Directors John Francis Daley and Jonathan Goldstein last delivered 2015’s Vacation. Writer Mark Perez also wrote 2006’s Accepted, an underrated comedy starring Justin Long, Jonah Hill and Blake Lively. I don’t know the genesis of Game Night, but it really nails the spirit of those titular events and how there’s always somebody who wants to win a little too much. In this film, Max (Jason Bateman) and Annie (Rachel McAdams) are the power couple of gaming who met as rival trivia team captains and continue their winning streak when they play frequently with Kevin (Lamorne Morris), Michelle (Kylie Bunbury), Ryan (Billy Magnussen) and Ryan’s bimbo of the week. When Max’s brother Brooks (Kyle Chandler) comes over to show up Max, he offers to host the next game night at his expensive new digs. When Brooks gets kidnapped, the group questions what’s real and what’s fake. Throw in creepy neighbor Gary (Jesse Plemons), and you’ve got a comedy that keeps you guessing while you’re laughing.

I love this cast. All of the performers play their parts perfectly. Bateman’s deadpan delivery never fails, and his track record with the TV show Arrested Development and films like The Switch and Horrible Bosses proves my point. McAdams has mostly delivered dramas and romances, so I now want more comedy from her after this hilarious turn. Bateman and McAdams play off each other nicely like a seasoned comedy duo, and I would not turn down a sequel to this movie or another project with them as the stars. Plemons steals every scene with his sad sack of a character who just wants to enjoy time with his friends after his divorce. Gary sucks the life out of every encounter, so it’s no surprise that Max and Annie want to avoid him. I must also mention Sharon Horgan as Ryan’s latest date Sarah, a woman who outranks and outsmarts Ryan in every way, much to his surprise and goofy fascination.

Game Night aspires to be on the same plane as a film like The Hangover, and it almost makes it despite its smaller scale. The adult humor defines the experience, and when done right as this most certainly is, you can forget the gaping plot holes and enjoy the moments. The running jokes about Ryan’s dates and the rivalry between Max and Brooks receive reinforcement throughout the running time much like a good stand-up comedian returns to a punch line later in his set. The scenes with McAdams and a gun are hilarious. The subplots in which characters split up in pairs offer a variety of wacky scenes like a comedy buffet. You will not forget a much-talked-about sequence with Max and Gary’s cute, white dog that serves as a metaphor for the movie in a way. Max tries hard to keep things on track and then just throws up his hands and gives in. That’s exactly how I felt about Game Night: don’t think too hard, and allow yourself to laugh at these silly characters in outrageous situations.

There are a few missteps in Game Night like a character guessing a password in seconds. For the most part, I found the film believable and fun. People who faint at the sight of blood will squirm a few times, so they should consider themselves warned. A few twists take the story to a whole other level, and after you think about it, the pieces were lined up in place all along. In fact, stay through the credits to get some insight into the plot a la the pictures shown in credits of The Hangover. Producers aim for PG-13 as the rating of choice these days, and that leaves people like me aching for R-rated comedies like this one. Game Night works for all audiences, but I’d especially encourage people who get together for weekly competitions to substitute a movie night instead.