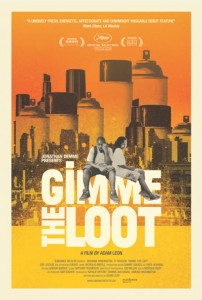 Gritty urban settings lend themselves well to crime flicks and heavy dramas. Comedies are rarer. If they pop up in those settings, you can expect a different brand of humor — perhaps more profane or exaggerated. Gimme the Loot firmly establishes its roots in the Bronx and other parts of New York City. I’m split about how much I liked the film because it has great promise on many levels yet doesn’t follow through on the most important elements of the film like plot and character development. As an indie film from a first-time director, you simply can’t expect a masterpiece. I didn’t, but I still ended up disappointed. Much like spray paint against a wall, the movie hit its mark in some ways while other parts just dissipated into thin air.

Writer/director Adam Leon makes his debut with Gimme the Loot, and I see great promise for him as a filmmaker going forward. That might explain why “Jonathan Demme Presents” comes before the title on the poster. Despite the short length of about 80 minutes, the pace and swagger of the film start immediately and stay constant for almost the entire time. The story takes place over two days in a heat wave as good friends and graffiti artists Malcolm (Ty Hickson) and Sofia (Tashiana Washington) go on a quest for fame or, perhaps, infamy. Their latest rooftop masterpiece was defaced by rival artists, so they decide to take it up a notch by placing their tags in a more prominent place. Actual archival video from the ‘80s starts the film and foreshadows the friends’ plan: they intend to “bomb the apple,” which means tag the giant apple that rises in the outfield after every home run at Citi Field (formerly Shea Stadium).

The quest leads to ambition because Malcolm and Sofia need $500 to pay off a security guard who can sneak them into the stadium. That’s easier said than done for these two teens. Malcolm sometimes runs drugs, and they both steal to get what they want or need. We first see the two lifting spray paint from a store and laughing hysterically after the robbery. The premise drives the activities of the pair as they try to scrounge up money. Malcolm sees an opportunity to steal jewelry from rich girl Ginnie (New York-based author and actress Zoe Lescaze) when he delivers her pot, and that scheme consumes him for most of the two days before the trip to Citi Field. All of the theft and crime might tend toward drama in most cases. Instead, the proceedings take on a jaunty rhythm with comical touches.

Hickson and Washington melt into these roles effortlessly and authentically, so it’s easy to accept the outrageous prank that they have planned. Lescaze similarly oozes New York chic and contributes to the realism of the movie. If Leon didn’t use her actual apartment for some of the scenes, I bet the production designer modeled the set after it. Hip hop artist Meeko has a scene as Sofia’s cohort Champion, and his face tattoos and demeanor fit nicely with the cast and setting. Gimme the Loot is steeped in New York City flavor. Characters even joke that a real Mets fan would never call Shea Stadium by new corporate name Citi Field. Malcolm and Sofia cover a lot of ground in New York over two days, and those visuals further establish the feel and spirit of the city. Gimme the Loot is only believable in its location; move the film to Atlanta, Chicago or any other major city, and it changes considerably.

The dialogue is full of profanity and insults, and this street language approach might hurt the ears of many moviegoers. I don’t doubt that characters like Malcolm and Sofia speak this way. It really didn’t bother me, but I could see that other members of the audience were offended by the constant barrage of colorful language. I wouldn’t take away points from Leon for this issue. Instead, I was more disappointed that the story just fell apart near the end and limped along to the underwhelming finale. I hate to see filmmakers ruin their own work by not following through on their concept, and that’s exactly what happens in Gimme the Loot. The graffiti artist angle even carries through to the poster with spray paint cans replacing skyscrapers in the cityscape of New York City. Touches like that and the lived-in feeling of the characters of Malcolm and Sofia keep Gimme the Loot from falling into the traps that trip up many first-time indie filmmakers. Leon will likely produce something stronger the next time, and Gimme the Loot hints at his style and abilities.