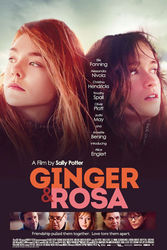 The teenage years are often the most turbulent while growing up because of both the raging hormones and the quest for one’s identity and place in the world. If you add to the mix world events of considerable significance or some worthy cause, those same teenage years become even more emotional and difficult. I was lucky to have my teen years coincide with the late ‘70s and early ‘80s. Sure, things were going on in the world, but most of those historical influences had no direct effect in my little world. There were also no real fears except for perhaps this new disease called AIDS. Ginger & Rosa steps back in time to London in the 1960s and mixes the adolescent yearnings of teenage girls with the threat of a nuclear holocaust. Much like the emotions of the titular characters, the film has its positives and negatives that are only bound together by the fine acting of its leads.

It’s hard for some audience members below a certain age to connect with the fears of nuclear war in Ginger & Rosa because those concerns have largely dissipated over the last half-century. Writer/director Sally Potter (writer/director of Orlando and Yes) set her story in 1962 at the height of the Cuban Missile Crisis. Although the threat to England was perhaps not as strong as it was to the United States, the English nevertheless made their feelings against nuclear armament heard with rallies and marches. This is London before The Beatles, but much of the peace and love of the ‘60s was already swirling in the air. Ginger & Rosa follows two teens as their friendship is tested by people, love and politics at a time when they probably need each other’s support the most.

Ginger (Elle Fanning) and Rosa (Alice Englert) grow up together almost as sisters. Ginger’s mother Natalie (Christina Hendricks of Mad Men) and Rosa’s mother Anoushka (Jodhi May) gave birth to their daughters in nearby beds, and the girls were inseparable for all of their lives. Ginger’s father Roland (Alessandro Nivola) is a self-important man with a wandering eye while Rosa’s father left early on. Of the two girls, Rosa seems to have her act together, but Ginger is a blubbering bundle of nerves who is worried about the pending nuclear crisis and how she can prevent war. Early in the movie, Ginger and Rosa share their first cigarettes and learn how to kiss boys, but over the course of the film, they grow apart as Ginger becomes an activist and Rosa pursues a shameful romance to the point of ignoring each other. Unfortunately, this vacillating focus of the film makes it hard to find something to like about the story.

The performances are solid with Fanning proving herself to be an even more capable young actress than older sister Dakota Fanning. You may know Fanning from Somewhere and Super 8. Prior to this movie, she made an enduring impression with Phoebe in Wonderland. Hopefully, she’ll stay away from the questionable roles that her sister took just to prove that she’s growing up. I was worried that Fanning would be a distraction with a phony British accent, but it was a relief to hear her slip on Ginger’s accent so effortlessly. Instead, I found Fanning’s hair color to be a larger problem. I understand that she was made a redhead to show that she’s the daughter of Hendricks. Unfortunately, the shade of red was so unnaturally awful that all of the other efforts by Fanning to inhabit Ginger were thrown off a bit. Potter should have seen that weird color and corrected it before the first scenes were shot.

Although Hendricks and Nivola handle their roles well, the focus is still on the girls. Englert also recently appeared in Beautiful Creatures, but this is actually her first film role, complete with the “introducing Alice Englert” title. As luck would have it, Beautiful Creatures made it to theaters first. Englert was the best part of that movie, and she equally makes her mark here. In such situations, I wonder how a film would be if the two leads switched roles. It would certainly have a different vibe, so I’m convinced that these actresses were cast correctly. Potter sadly resorts to distracting stunt casting for minor roles. Both Roland and Natalie come from artistic backgrounds, and Ginger luckily has two godfathers in gay couple Mark (Timothy Spall) and Mark Two (Oliver Platt), friends of their parents. The two Marks also know an American poet named Bella (Annette Bening with flat hair and glasses) who is visiting London. Roland, the two Marks and Bella all encourage Ginger’s activism. The scenes with the two Marks and Bella take you out of the movie because it’s hard to accept Platt and Bening as those characters. Spall can play just about anyone and melts into his roles as he did in The King’s Speech as Winston Churchill and in the recent Upside Down. That’s not true for Platt and Bening here.

Ginger & Rosa ends up as an average movie despite all of the positives. Fanning’s great performance is simply not enough to save an entire film. There are only so many close-ups of Fanning crying that I can take in one movie. Potter’s Orlando and Yes were stronger efforts. This flick is perfect for fans of character-driven art house dramas, but it leaves a lot of others unfulfilled. Regardless of whether you like it or not, expect to feel emotionally exhausted after the tense final act.