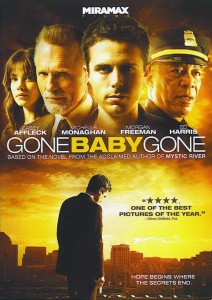 For a bit more than one word, Ben Affleck‘s first directorial experience, Gone Baby Gone, is a beautiful film that should impress most everyone that sees it.

The movie impressed at nearly every turn and from every angle. The most notable thing about it was how dead-on realistic it all seemed. Characters in it acted exactly the way you’d expect them to act in real life. They looked the part. Even the “pretty faces” were noticeably worn. Furthermore, the acting was superb across the board.

The story was also pretty impressive. I’ll be curious to see if people sense the ending long before it gets there but it appeared most in the theater we were in didn’t. I saw a good chunk of it but that’s because I’m always looking to figure it out ahead of time. The best thing about the story itself is that it will most likely pull you apart emotionally. You won’t know what the best options are and this film does not take the easy way out. Choices have consequences and those consequences, as in life, often come to pass.

Surrounding it all is a soundtrack that’s every bit as impressive as the rest of the film. It sets the tone without dictating it or ever feeling dominant.

I will be recommending this movie to friends and family for a long time to come. Ben Affleck needs to be congratulated for this effort. I’m not sure if I’d call this Oscar-worthy for direction but I wouldn’t rule it out either. Go see it.