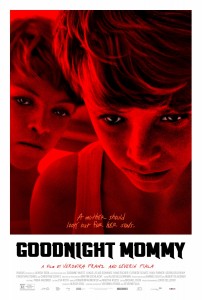 Twin ten-year-old boys interrogate their mother after she returns home from major surgery in the highly manipulative Goodnight Mommy.

Elias (Elias Schwarz) and his twin brother Lukas (Lukas Schwarz) are the sons of a local celebrity. Their mother (Susanne Wuest) is a well-known TV news personality and has just returned home from major cosmetic surgery. The boys are taken aback by her shocking appearance. They can only make out foreign bloated eyes and lips that protrude awkwardly through layers of taut facial gauze. Her face isn’t the only thing that’s undergone a radical change; the haunting visage behind the mask suddenly seems to have no love or patience for her sons. She barks at them in short acerbic bursts dominated by ever-increasing draconian rules.

As the days go by, the boys begin to question the authenticity of the person claiming to be their beloved mother. During her frequent naps, the pair rummage through the house looking for proof that they can use to expose the potential imposter. 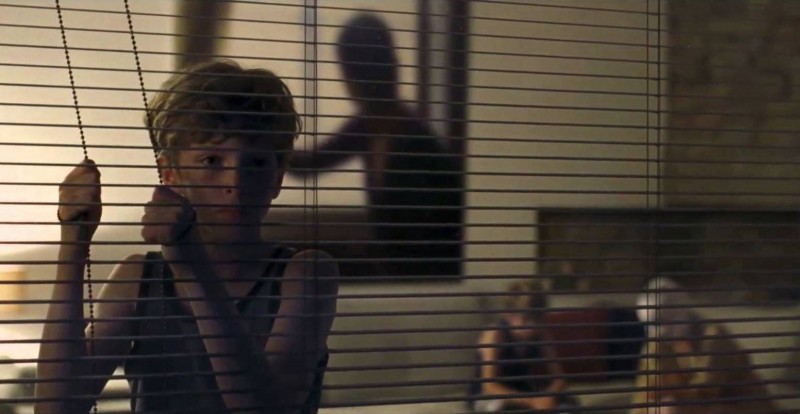 This Austrian, German-language horror film employs every possible graphic trick to draw you into its web. The house that they inhabit is a treasure trove of disturbing visuals. The walls provoke us with dreamlike photos. The shelves tease us with unnerving trinkets. All of it is accentuated by the perpetual darkness demanded by the light-sensitive mother. Her own outward appearance only adds to the aura, looking more like an evil carnival clown than a soft, approachable matriarch.

It would have all been magnificent if only the script received the same attention as the imagery. The point of the film is in the power of the punch line, but it’s a punch line that we know almost from the outset. We’ve all been there. Someone starts to tell you a long-winded joke that you already know. and despite your protestations, the teller keeps rambling on and reciting it. At the end, all we can do is groan.

While we’re forced to wait for the inevitable ending, the film doubles down on cheap thrills. The score suddenly gets more insistent. The scenes get more perverse. The plot goes from mildly intriguing to entirely ridiculous. The worst example is a late scene involving a pair of Red Cross workers. There isn’t an audience member in the theater that should find it even remotely plausible.

If you struggle to figure out how to tie your shoes in the morning, this is the horror film for you.