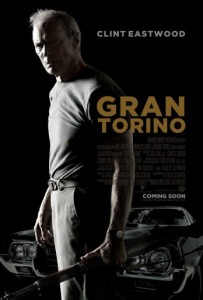 This week I got out to finally see Clint Eastwood‘s Gran Torino. It’s been said that this will be his final movie as an actor. We’ve heard that a lot of previous older actors only to have them change their mind later. We’ll see.

The movie really is a complete vehicle for Clint Eastwood. It showcases just about every facet of his allure from throughout his career and underscores why it is he’s been so popular and successful. You get to see the raw testosterone of Dirty Harry, the wisdom of Million Dollar Baby, the compassion of Bridges of Madison County and the laughter of Any Which Way But Loose.

Here we get a story about a man whose time has very much passed him by. Little in the world makes sense to him any longer and he even has trouble relating to his own family. He tends to have a disdain for everyone except for his most superfluous relationships. When a family of Vietnamese move in next door this veteran of the Korean War can only wonder how much worse things can get.

It is from that perspective that we are taken on the final journey of the main character. Eastwood gives the audience everything they want and yet does it in a skillful way that doesn’t feel cheap or beyond reality. His character, he tells us, is all about finishing things. It’s what he does. The irony is that his own life seems impervious to this very fact.

Gran Torino is not a perfect movie. The ensemble cast is spotty. Some of the acting is less than stellar and some of the writing could have been better. However, if this is Eastwood’s final movie as an actor, it’s one he can be entirely proud to go out on.