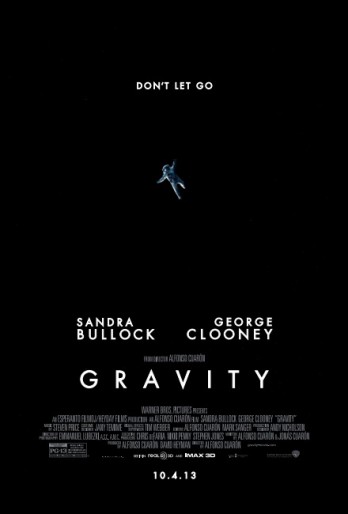 When I first heard about Gravity, I joked about it and thought that it could never work. An entire movie of Sandra Bullock and George Clooney floating around in space?! No way! Would it be a disaster or a triumph? As I always do, I withhold judgment until I actually see a movie — no matter how heavy the hype. Well, I have to take back my inflatable Clooney jokes and join the bandwagon of praise for this movie. Gravity completely took me by surprise and focused me intently on the story of two astronauts thrust into the middle of an untenable situation with little chance for a happy outcome. I was exhilarated by the personal adventure and forced to clap when the film’s final frame lit up the screen before the blackness of the credits. Gravity will likely garner tons of rewards for its special effects and technology, but it also deserves high praise as a captivating cinematic experience that ranks as perhaps the best film of the year and one of the best of all time.

At its core, Gravity is a minimalist movie. There are really only two characters — Dr. Ryan Stone (Bullock) and astronaut Matt Kowalski (Clooney). You hear the voice of Ed Harris as Mission Control early in the story and the occasional voices of other astronauts, but the focus is on the pair of polar opposite space explorers. Stone is a medical engineer and nervous space walker who is conducting science experiments and fixing equipment on the end of a long arm sticking out of a space shuttle. Kowalski has all of the cockiness of an ace pilot or sports star, and his personality feels like a spoof of Clooney himself. Kowalski likes to reveal his exploits from his storied past, and he probably figures that he should get them all out because he’s about to retire. Stone just wants to do her job and conduct her experiments without too much discomfort. Oops. When the Russians inexplicably destroy one of their own satellites with a missile, the resulting debris tears through the shuttle and the nearby space station. Our heroes are in perilous danger, and this incident initiates a challenging tale of survival.

Gravity comes from cowriter/director Alfonso Cuarón (cowriter/director of Children of Men and Y Tu Mamá También and director of Harry Potter and the Prisoner of Azkaban) and cowriter Jonás Cuarón (writer/director of Year of the Nail), who is also Alfonso’s son. Alfonso Cuarón evidently devised this story many years ago, and he had to wait for film technology to catch up so that he could make it. I thought that I had seen it all in movies, but I was dead wrong. Gravity is a work of art from the first frame to the last, and I sat in awe of the screen much like many other seminal moments in special effects history in the movies. Gravity’s scenes join other landmarks like the introduction of sound in The Jazz Singer, the stop-motion effects in King Kong, Bullet Time in The Matrix and advances in 3D technology in Avatar. I’m sure that there will be plenty of articles and videos made about the special effects in this movie. I don’t want to peek behind the curtain until I’ve seen the movie a few more times in the theater.

Special effects can only take a movie so far. The actors need to sell the movie magic that’s happening up on the screen. Clooney has a supporting role here, but he establishes a lighthearted, cocky astronaut in the first few minutes who annoys everyone within earshot of the Hank Williams Jr. song he insists on playing through the common sound system. You can forget all about The Blind Side and, fortunately, The Heat with Bullock’s standout acting. She has never been better than in Gravity, and her performance is part ballet and part physical endurance because of the harnesses and sets used to simulate weightlessness. Stone has some pain in her past, too, so does she give up and dismiss the pain or endure and fight through it? Robert Downey Jr. turned down this role because of the rigors of filming in whatever contraption Alfonso Cuarón devised, and Clooney works as a good substitute. Make no mistake — this is Bullock’s movie through and through, and she pulls it off in every scene. I can’t really say much about the plot because that’s part of the journey of the characters. I can say that the film feels a lot like Apollo 13 in that characters have to improvise against astronomical odds to survive in space and somehow make it to safety. 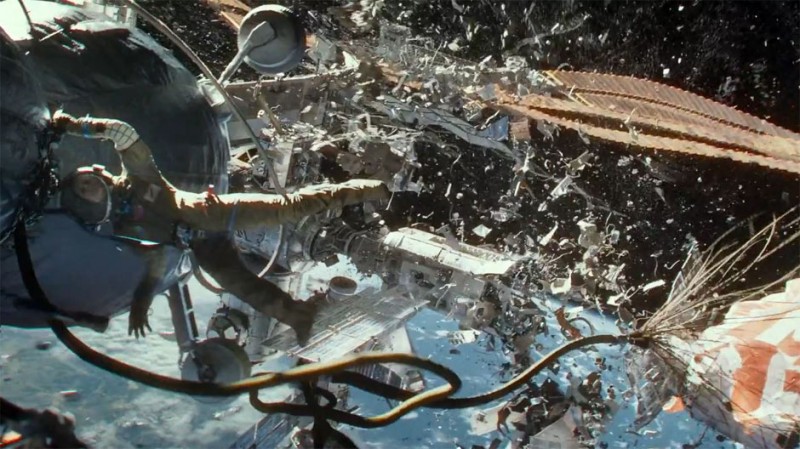 Alfonso Cuarón isn’t the only artist whose technical work enhances the experience. Steven Price’s music ramps up the tension at appropriate times, while there are entire sequences with no sound whatsoever because there is purportedly no sound in space. I was amazed that the complete lack of sound during some of the explosions and scenes with particles ripping through the shuttle and space station actually made the scenes more intense than the addition of sound effects could ever do. The feeling of helplessness to do anything about the damage by Stone and Kowalski is palpable and takes your breath away. Cinematographer Emmanuel Lubezki and visual effects supervisor Timothy Webber are Alfonso Cuarón’s accomplices in pulling off space scenes and making the perspective feel fluid as it flies around the main characters and in and out of space vehicles. Except for a few shots, all of Gravity was filmed on a soundstage, yet it instead feels like the vastness of space is represented. A couple of shots stick with me, including one of Stone floating against a door with tubes that looks like a fetus and its umbilical cord. This is breathtaking, especially considering the point when it takes place in the story. Unlike most movies released in IMAX or IMAX 3D, Gravity actually benefits from those formats because they bring you into Stone’s experience and even as close as the inside of her helmet.

I think I’ve gushed enough about Gravity. All of the words in the world can’t capture the excitement and gamut of emotions that the film triggers. You just have to experience it for yourself, and then you’ll believe what all of us reviewers have been saying. I almost look forward to the naysayers to see how hard they have to try to hate this movie. I won’t join them. I’m convinced that Gravity will stand the test of time. When Kowalski tells Stone “Don’t let go,” you’ll feel Stone’s determination to comply and maybe hold on to your own life a little bit more strongly.