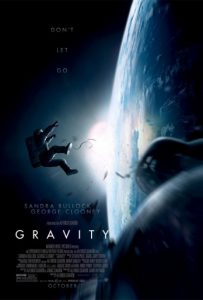 A space shuttle crew effecting repairs on the Hubble Space Telescope is bombarded by space debris, leaving them helpless in the vacuum of space in Gravity.

It’s the most hostile environment known to mankind. Without extensive protection, humans wouldn’t be able to survive in it for even a few seconds. That harsh environment we call space is what astronauts come face to face with on every foray into its midst. It’s quite ironic that this endless expanse is, for us, so effectively confining. Only the most physically and mentally fit among us ever get to find this out firsthand.

The film transports us 350 miles above the surface of our beautiful blue planet. There we get a close-up view of one such team busily repairing the Hubble Space Telescope. Among them are veteran astronaut Matt Kowalski (George Clooney) and first-timer medical engineer Dr. Ryan Stone (Sandra Bullock). Their mission is proceeding normally when, suddenly, they’re engulfed by a sea of missile-like space junk traveling at 20,000 miles per hour. It devastates their shuttle and everything around it. Kowalski and Stone are left adrift in the dead of space where there are no simple solutions. Survival is the first order of business. Only then can they effect any plan for returning safely back to Earth. 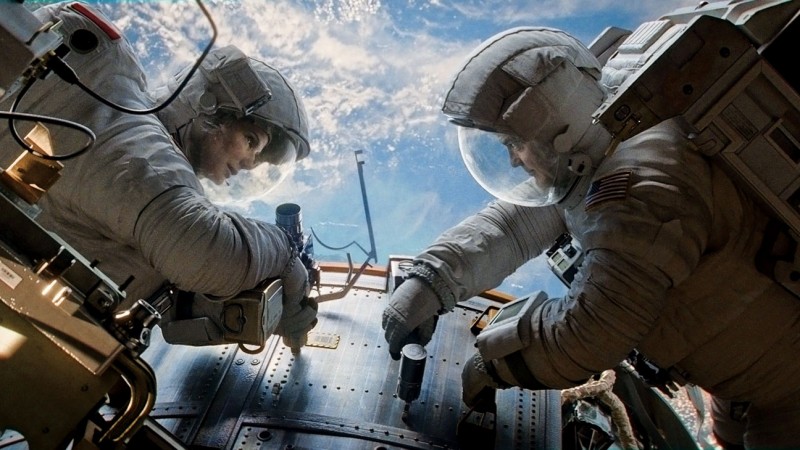 This is a film unlike anything I’ve ever experienced before. It’s 93 minutes of pure adrenaline surrounded by a sense of claustrophobic terror beyond anything ever put on screen. The visuals alone are utterly jaw dropping. It represents a pinnacle of technical achievement as impressive as anything else in the history of film.

There have been similar stories. The eerie film Open Water comes immediately to mind. That had us watch as two divers find themselves abandoned in the middle of the vast ocean. Gravity takes that simple concept and replaces a seemingly limitless sea with genuinely limitless space. The impact on the experience is monumental.

Forget the story. It’s not even a consideration here. Put it out of your mind, and just go along for the ride of your life. If you must peek behind the curtain, you’ll find a setup that’s, frankly, highly improbable at best. None of it matters. The sensual serenity of the film’s opening scenes and its instantly captivating backdrop are as hypnotic as the songs of a master sea siren. I wouldn’t be at all surprised to hear audiences complaining of bouts of nausea due entirely to the unparalleled effects. I also highly recommend you make every effort to see this in 3D. I can’t imagine a better platform for such immersion.

Director Alfonso Cuarón may need his own space shuttle to haul away all the gold he’s likely to rack up during the awards season. He hits all the right notes from incomparable first-person shots to a soundtrack that keeps the audience entrenched in the action. Just when you’re sure you’ve seen all the film has to offer, it hits home with several poignant moments amidst all the tension.

This is an absolute triumph of filmmaking. It’s one small step for viewers and one giant leap for science fiction movies.