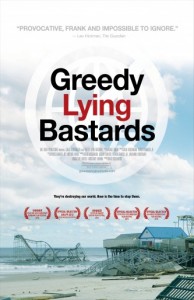 Documentaries that take a strong position are often hit or miss because they might alienate half of the audience from the start. With a title like Greedy Lying Bastards, there’s no question about the feelings of the filmmaker toward his subjects. A title like that would suggest that this documentary is funny or satirical. There are some humorous moments made at the expense of some of the subjects, but this is largely a documentary with an agenda: expose the global warming deniers for the real reasons behind their actions. Greedy Lying Bastards joins the ranks of lots of other documentaries to rile you up and remind you of just how badly politics and money affect our world.

This film is the work of cowriter/director/interviewer Craig Scott Rosebraugh and cowriter Patrick Gambuti Jr. (cowriter of Bill W.). Rosebraugh is both a filmmaker and a political activist, a background that works well for his subject. He comes off like a kinder, gentler Michael Moore with occasional appearances on camera and even a Moore-like stunt that actually achieves its purpose without alienating the audience as Moore did by ambushing Charlton Heston in Bowling for Columbine. Rosebraugh’s goal is to investigate global warming and take on those people who deny that it exists. I don’t think that there’s much to argue about when it comes to major changes in the environment as a result of man’s lack of care for it. There are questions about the severity and reversibility of the effects, and people like Al Gore don’t help the cause when they doctor the results to fit their agenda as Gore did in An Inconvenient Truth. Rosebraugh comes off as genuine in his concern and ambitious to get people to talk about the issue.

There are a variety of culprits identified as global warming deniers, but chief on the list are the Koch Brothers, rich executives who run a variety of companies. Rosebraugh sketches out the connections and contributions of David and Charles Koch, and it’s enough to make you sick when you see politics in action. Rosebraugh also targets ExxonMobil and tries repeatedly with no success to speak to the CEO until he uses stealth means to get him on the record. Although there are many people from climate experts to politicians interviewed in the documentary, Rosebraugh’s most memorable scenes are when he gets out from the interviewer’s chair and goes on location to see the physical effects of climate change. He visits a wheat farm that’s failing because of lack of rain and the small town of Kivalina, Alaska, which will probably have to relocate because of the eroding shoreline that comes from rising temperatures and waters. Such concerns also affect Tuvalu, an island nation that is slowly losing its fight to the ocean as the waters rise and flood its homes.

The titular liars and deniers get screen time in clips that make their comments and stances look particularly foolish. Glenn Beck, Rush Limbaugh and Jay Lehr of The Heartland Institute are targets of Rosebraugh’s along with the Koch Brothers and many others. Clarence Thomas has some connections that make the questions about Anita Hill pale in comparison. One of the posters for Greedy Lying Bastards has a lot of smiling faces of Rosebraugh’s targets — a layout that fits the title. Although these people get most of the screen time, the film does have its star or hero in U.S. Representative Henry Waxman of California. Registered a Democrat, Waxman doesn’t seem to care much about parties when it comes to global warming and other issues that affect his constituents in particular and Americans in general. I’ve seen Waxman in other documentaries, and his actions seem to place him as a man of the people. I haven’t traced his donors and backers, but for at least the causes of Rosebraugh in this film, Waxman has the right attitude and wants to make a difference. That’s what’s needed to tackle environmental issues and take the power out of the hands of those out to profit from the environment and put it back into the hands of those interested more in stewardship. Will this documentary have much of an effect? I’m not sure, but it will certainly generate some discussions around the topics.

If there’s any flaw with Greedy Lying Bastards, it’s that it’s not a well-balanced film. For every global warming denier featured, there may be a scientist or other expert in the field who has a legitimate argument or opinion. Those people don’t appear in this movie. Rosebraugh uses scare tactics to start his film with images of drought, wildfires, tornadoes, floods and heat waves, and I’ve always felt that it’s a cheap approach to open up a discussion on global warming. Yes, global warming may cause a variety of environmental disasters, but all of those events took place long before aerosol cans and fossil fuel plants. The new movie poster used to promote the film has an iconic shot of the Jet Star roller coaster from the Seaside Heights Casino Pier in the ocean as a result of Hurricane Sandy. That’s a better poster to catch the attention of moviegoers, but the original poster fits the title and subject matter better. I have a small nit to pick with Rosebraugh’s graphics because he uses the familiar “no” or “not” symbol — as in no smoking or no dog walking — with an image of the world. He mostly uses a forward slash instead of the accepted backslash, but he occasionally, inconsistently flips it the right way as well. A little research would have showed him that the backslash is the way to go. Daryl Hannah is an executive producer, and her history of championing environmental causes is a good fit. Overall, Greedy Lying Bastards is both entertaining and informative without falling into the trap of boring documentaries by relying only on interviews. A balanced approach would have won over more naysayers, but I’ll certainly keep an eye on Rosebraugh in the future as he produces more documentaries.