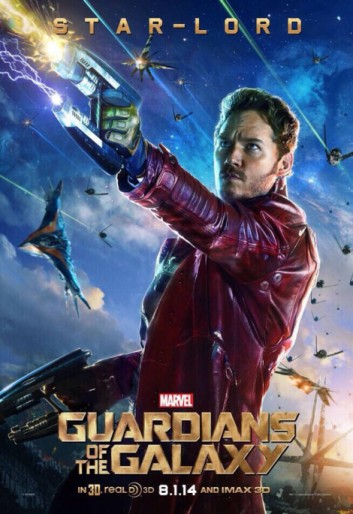 It has been an interesting summer for the major superhero movies. Things started off strong with Captain America: The Winter Soldier because it went beyond its superhero origin. I was disappointed by The Amazing Spider-Man 2, which felt more like a romance to me than a film centered on a comic book character. X-Men: Days of Future Past picked things up again with its intricate time travel plot. I would have never expected that Guardians of the Galaxy would come out swinging as the best of the Marvel properties. A lot of this success has to do with cowriter/director James Gunn, who knows how to mix the fantastic and the funny from his days at Troma Studios. That wicked sense of humor gives this outing its appeal and makes it feel like reading the best of the campy superhero comic books. Guardians of the Galaxy is pure joy to watch from start to finish, and it serves as a welcome respite until next summer’s sequel to The Avengers.

Gunn (writer/director of Slither and Super, writer of both Scooby-Doo movies and cowriter of Tromeo and Juliet) cut his teeth on Troma films alongside the legendary Lloyd Kaufman, who has a brief cameo. If you’ve ever watched a Troma film, whether it be horror or any other genre, you know that you’ll laugh a lot. Gunn and cowriter Nicole Perlman brought that lightness to this adaptation of the ragtag team as presented in a second comic series started in 2008 by Dan Abnett and Andy Lanning. Although the most serious scene begins the movie, the second sequence summarizes the spirit of the film with Peter Quill aka Star-Lord (Chris Pratt of The LEGO Movie) dancing around on an abandoned planet to his favorite music while dealing with little critters and other dangers. This mixture of comedy, drama, wackiness and sci-fi trappings sets Guardians of the Galaxy apart from almost any other superhero film. It does call to mind the underrated Galaxy Quest.

Quill was abducted from Earth in 1988 by a band of space pirates called the Ravagers, and 26 years later, he’s about to steal something that starts an adventure with cosmic repercussions. Quill takes an orb that everybody seems to want, including Yundu Udonta (Michael Rooker), the head of the Ravagers, and Korath the Pursuer (Djimon Hounsou), an enforcer for the powerful Ronan the Accuser (Lee Pace). After trying to sell the orb, Quill ends up in prison alongside assassin Gamora (Zoe Saldana), brute Drax the Destroyer (wrestler Dave Bautista), talking raccoon Rocket (voiced by Bradley Cooper) and tree creature Groot (voiced by Vin Diesel). Quill and his new friends join forces to investigate the orb and make sure that it doesn’t fall into the wrong hands.

The cast is as eclectic as the members who make up the titular group. Pratt carries the movie nicely with his blend of snark and bravery. Saldana and Bautista have strongly physical roles in their expansive body makeup, and Bautista steals a lot of scenes with his deadpan delivery. Saldana only needs to portray a mostly red character to complete a set of primary colors started with the blue Neytiri in Avatar. It’s understandable that you don’t recognize Diesel because Groot has few lines of dialogue. Cooper takes on an entirely different persona and voice as Rocket, and he’s responsible for some of the best lines and laughs. Pace is completely lost in his makeup as Ronan, while Rooker’s personality shines through the blue skin and various prosthetics. Karen Gillan (Oculus and Doctor Who) shaved her head for the cybernetic Nebula, and she’s a fine example of how the supporting cast is as solid as the main performers. This is a huge plus because John C. Reilly, Glenn Close and Benicio Del Toro manage to make the most of their limited roles that could have easily gone to less famous faces. There are plenty of cameos and uncredited roles both in person — another winning one from Marvel founder Stan Lee — and in voice only, and it’s revealing to look over the cast list to see some of the names before your eventual second viewing. For those who understand the ramifications of the contents of the orb, the film establishes a greater connection to the upcoming Marvel films.

The digital special effects are top-notch, from the explosions and planetary travel to the more intense work like main characters Groot and Rocket. There are probably only a few scenes that don’t feature any kind of special effects, and the rest of the film makes up for it with the wonders on the screen. I was actually more impressed with the wide array of special effects makeup, all of which doesn’t look hokey at all. Characters like Ronan, Nebula and Yundu are fully realized through extensive makeup and prosthetics and other little touches like colored contact lenses and attached mechanical pieces. As a huge fan of makeup effects and the TV show Face Off, this movie was like all of the best techniques brought into one production. The range goes from the simple red skin coloring for Quill’s temporary female companion Bereet (Melia Kreiling) to the more elaborate work in my favorite makeup of the film for The Broker (Christopher Fairbank). This combination of prosthetics, coloring and dental work allows Fairbank to create a memorable character despite all of the extensive pieces. 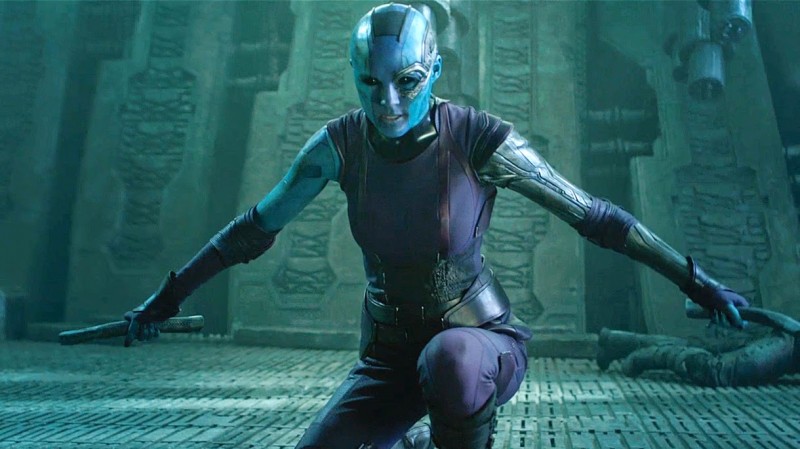 When I first saw the trailer, I had great hope that the music that was so prominent would carry over to the actual movie. It certainly does, and music is not just slapped onto the scenes. Quill prizes a gift from his mother of a Sony Walkman and a cassette tape labeled “AWESOME MIX VOL. 1” that includes songs from the ‘70s, notably the featured “Hooked on a Feeling” by Blue Swede. The soundtrack is a collection of all of the songs from the film in a CD case that looks like Quill’s tape, so if you like Quill’s mixtape, you can get it for yourself. Gunn will hopefully merge popular music with the scenes as seamlessly in the sequel.

If I have any complaint, it would be that events like explosions and crashes don’t affect characters like they should. Some of the damage and punches should knock out or kill people, yet they manage to bounce back scene after scene. Sure, it’s a superhero movie that requires me to suspend belief for most of the running time, but even fudged physics has its limits. I left the theater with a big smile on my face, as did most of the people that I watched file out. Par for the course of these films, there are two extra scenes during and after the credits that will continue that feeling of joy. Guardians of the Galaxy caught me off guard and brought to the screen all of the elements of the best comic books that make them fun and addictive. Move over a little, Avengers. There’s plenty of room in the Marvel universe for another powerhouse superhero team.