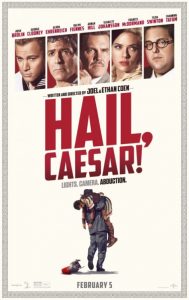 A 1950s studio executive manages an eclectic and eccentric array of stars and staff in the farcical comedy Hail, Caesar!

Eddie Mannix (Josh Brolin) gets things done. It’s just that simple. Nothing gets in his way. If a potential starlet strays off course, he’s there to yank her back on track. If the press gets wind of a major scandal, he’s the man with the plan ready to defuse and distract as needed. His most recent concern is the completion of a major period piece featuring blockbuster megastar Baird Whitlock (George Clooney) as a Roman centurion captivated by Jesus Christ. Mannix goes manic when Whitlock goes missing in the middle of the shoot.

If that’s not enough to keep him hopping, his biggest starlet DeeAnna Moran (Scarlett Johansson) finds herself in a motherly way without a father nearby. Mannix also has to contend with fallout from his drama (queen) director Laurence Laurentz (Ralph Fiennes) over a studio-mandated casting decision. It’s all just another typical day in the life of a movie man, but is it the kind of day that Mannix really wants?

This is the 19th film written and directed by the Coen Brothers (Joel Coen and Ethan Coen), and it’s also their 12th comedy. A few of their more serious films are already considered classics. They’re clearly masters of the art of filmmaking. Why is it then that the only comedy of theirs that I enjoyed is 1994’s The Hudsucker Proxy? That’s right. I don’t even think that there’s much to laugh at in 1998’s The Big Lebowski. To paraphrase the old saying, humor is in the ear of the hearer. Some of us (like me) find Monty Python hilarious, while others can’t fathom the joke. Humor always treads a fine line between silly and dumb. For me, the Coen comedies generally have no concept of that line.

Their latest effort feels like a potluck dinner of random recipes quickly tossed into one big salad bowl. Brolin does a fine job as the studio’s hatchet man, perhaps in large part because it’s the least caricatured role in the cast. Adding to the mystery is a surprising kick-ass musical number with Channing Tatum that materializes out of nowhere and vanishes without a trace. Much of the rest is skit-level material with a cavalcade of stars mugging endlessly for the camera.

Clooney is the chief goon of the bunch. I’d say that his clown routine no longer works, but that suggests a time when it once did. I can’t think of one. I’m sure that some viewers will find this to be a gloriously witty lampoon of the film business. I’m willing to bet that just as many will find it to be a complete bore. 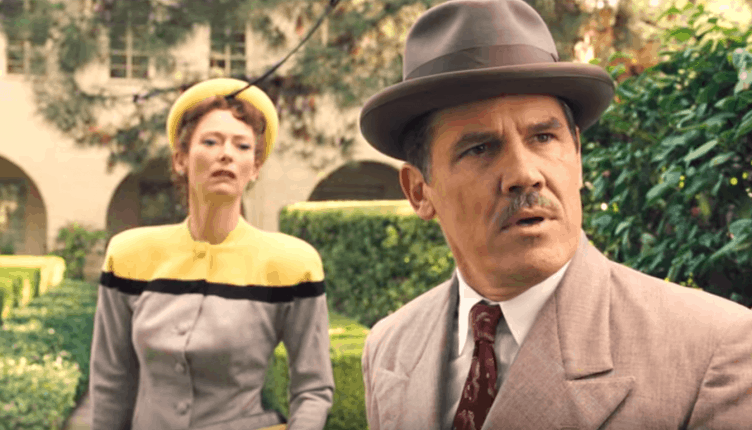