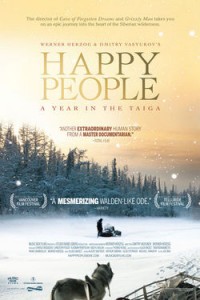 If I ever complain about my job or living conditions, just remind me how difficult they could be with the word “Taiga” and watch me shut up. The best documentaries take you someplace new or introduce a subject you never knew before and entertain you in the process. Happy People: A Year in the Taiga is an endlessly fascinating documentary about fur trappers and their way of life in Siberia. This film puts you right alongside a few of these trappers as they go about their solitary jobs in conditions you wouldn’t believe. If the heat goes off in your office, keep in mind that the temperature is still probably higher than 50 degrees.

The film is credited to directors Werner Herzog and Dmitry Vasyukov and writers Herzog, Vasyukov and Herzog’s son Rudolph Herzog. These credits belie the actual presentation distributed to theaters. Herzog learned about a four-hour Russian TV program filmed by Vasyukov and was determined to put together a theatrical version. Unlike his recent Cave of Forgotten Dreams, Herzog never left the editing bay and recording booth to put his unique spin on the footage with his narration. I wonder what additional perspective an actual trip to Siberia would have bestowed upon Herzog. Regardless of whether this is a “cheat” of sorts for Herzog to put his name on it as a director instead of perhaps the tag “Presented by Werner Herzog,” I’m happy that I was able to spend some time with the profiled fur trappers from the comfort of a movie theater.

The Taiga of the title is the name/word for the extensive Siberian forest where the fur trappers do their work. The film focuses on three trappers – Gennady, Mikhail and Anatoly – over the course of a year’s change of seasons. They live in the remote village of Bakhtia near the Yenisei River in the heart of Siberia. The village only has about 300 people, and the only way to reach the village is by helicopter year round and by boat in the brief summer. The work almost never stops, but the men do take off some time for a week from New Year’s Eve through Russian Christmas. Fur trapping is a solitary way of life with only the necessary Siberian Huskies to keep the men company.

The craftsmanship exhibited by these men is remarkable. Watch them make a simple trap with two trees and a branch that catches sables — the source of the furs in question — every time. Gennady uses an axe as both a blunt weapon and a fine carving tool. He explains why the skis he makes from trees with straight-grained bark will outlast any commercial skis. The seasons comprise a cycle with different tasks and objectives. Spring and summer are for fixing the hunting cabins and tools for the next hunting season as well as storing the fish necessary to feed the dogs. Fall is for setting the traps, and the dead of winter is for the actual hunting. Difficulties arise all year round. The mild summer would be enjoyable were it not for the swarms of mosquitoes that also want to take advantage of the temperature. The trappers rub tar on their bodies to ward off the bugs while they work.

I never considered fur trapping as a craft, but after watching this documentary, I have a greater respect for its subject. From crafting boats and traps to lining trees with plastic to keep mice from climbing them to reach the bread hung in the branches, the fur trappers use nature and ingenuity to perform their jobs and live comfortably. The thermometer never gets above 50 degrees and often hovers around 50 degrees below, yet these men sometimes work without gloves. Perhaps Herzog has an ulterior motive in preparing this shorter look at the Russian TV series. I was entertained and informed enough to want to watch the entire series after this wonderful documentary.