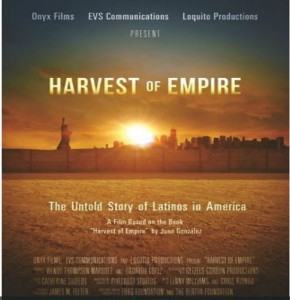 Immigration is one of the hottest topics in politics in America today, and it will only gain prominence as Congress does nothing to address it and we enter another presidential election cycle. People are divided about this issue along racial, political and economic lines; it’s as important to some people as abortion. A documentary about immigration couldn’t be timelier. Harvest of Empire methodically explores the reasons why many people from Central America and Mexico want to come to America. On that much, it succeeds. Unfortunately, it prompts a larger discussion on immigration and then doesn’t contribute any solutions to the issues that arise once all of those people get here, either legally or by various illegal means. I’m convinced that a more well-balanced film would inform a lot of people and captivate a wider audience instead of just playing to a sympathetic audience.

If Harvest of Empire feels scholarly and perhaps a bit dry that way, it may be that the source material led directors Peter Getzels and Eduardo Lopez down that path. The film is based on the similarly titled book by journalist Juan Gonzalez, who put together his idea after years of observation in his profession. The subtitle more fully describes the concept of the book. “The Untold Story of Latinos in America” is a hefty subject to tackle, but Gonzalez clearly conducted the proper amount of research to support his theories. He also serves as the narrator and main interviewee for the film. Gonzalez has a pleasant personality like a popular college professor, so I’d be interested in taking a course he taught or attending a lecture.

Starting with Puerto Rico and moving on to Mexico and Central American countries, Gonzalez explains how the United States influenced these areas of the world through the country’s expansionist policies. In some of these locations like Nicaragua and El Salvador, the United States established military regimes that ruined the economies and threatened the lives of the citizens. Why wouldn’t those people want to leave immediately? Everybody wants to come to the United States. They see it on TV and in movies as a land of opportunity. If they have no opportunity at home, then this is the place to be. I understand that argument, and Gonzalez supports it and the history he cites with file footage, maps, charts and other graphics and video. I can’t fault the film on an abundance of ideas.

In addition to Gonzalez, the film boasts a strong lineup of interviewees. These people mostly tell stories of their own experiences or families like TV journalist Geraldo Rivera, who comments on his parents and his childhood. Nobel Peace Prize winner Rigoberta Menchu tugs at the heartstrings with the stories of her ancestors. Other featured commentators are Grammy Award-winning singer Luis Enrique, NPR reporter Maria Hinojosa, Pulitzer Prize-winning author Junot Diaz and ACLU Director Anthony Romero. These people contribute somewhat to the dry, scholarly feel of the documentary. It’s one thing to listen to someone, but it’s another thing entirely to go into the field to watch someone at work. The most powerful segments in Harvest of Empire are the scenes with Enrique Morones, founder of Border Angels, a group that leaves food and water in the desert for people crossing the desert from Mexico to the United States. You could argue about the legality of illegal aliens crossing the border, but there’s no denying the humanity of the group’s efforts to keep people from dying. Morones walks through a graveyard of people who died in the desert to drive home why he does his work.

Harvest of Empire does a good job supporting Gonzalez’s theories and explaining why vast numbers of Latinos want to come to America. Where he falls short is explaining what to do with them once they’re here. That’s half of the immigration argument right there. There are reasons for immigration quotas that involve sustainability of the regions where legal immigrants settle in terms of services, homes and jobs. This film doesn’t offer any solutions for those issues. It also doesn’t address the rampant criminal activity that results in drugs and other contraband streaming across the border from Mexico. It may be true that most people who come here have good intentions, but you also can’t turn your head to ignore the problematic types that come with them. Any immigration policy has to address the people who are already here, plan for legal immigration for those who want to become Americans and secure the border to prevent further illegal immigration and criminals. Unless those elements of the issue are examined, the reasons for people coming here get lost in the arguments about how they arrive.

I once had a long conversation with the cleaning lady in my building about her family in Mexico, why she came here to work — she worked long hours in data entry in Mexico until carpal tunnel syndrome prevented her from doing that anymore — and how she’s so happy to be on the path to citizenship as a guest worker. I listened to her story and thought to myself how it’s exactly what the American Dream is all about. She recently had her first child, and I bet that child will grow up both appreciating this country and knowing his heritage. If you saw the movie A Better Life about a man in California illegally who’s just trying to provide for his son, you know that it’s a powerful presentation of the issues around immigration. Matching a face or personality to the statistics certainly tends to lessen the politics and humanize the discussion. Harvest of Empire may very well be a starting point for the history of Latinos in America and beyond. It’s a good documentary that might open some eyes and change some opinions; its omissions don’t weaken its points but instead leave room for improvement and expansion.test https://slashcomment.com/entertainment/brave/