The cause of Latino-based American immigration is the focus of a new documentary based on the book from award-winning journalist Juan González entitled Harvest of Empire. 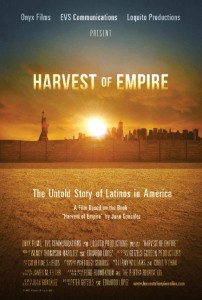 Harvest of Empire comes along at an incredibly opportune time just as the United States government wrestles with the latest round of immigration reform. This documentary examines the root causes of Latino immigrating by looking back at the histories of the countries from which most of those people originated.

The general path of the film is to focus on each country, one by one, to understand why it is that so many people are emigrating away from their families, their homes and the only culture they know in order to come to a strange new country. Each story shares many similarities. The overriding theme in every one is that we played a large role in creating our own dilemma. We handpicked the dictators that ruled the people with an iron fist. We dealt with those dictators because, paraphrasing Franklin Roosevelt, they may be bastards but they’re our bastards. We controlled them and they allowed our industries to thrive within their countries. In some cases, we simply marched in, took over and then left chaos behind as we exited.

Is it any wonder that people growing up in such oppressive and devastated countries would yearn for the perceived free society of America and a chance at a better life? It seems that we’ve created the maximum whirlpool effect with our incredibly successful marketing campaign of America as the ultimate life experience. Everyone grows up with the American Dream regardless of what border they happen to find themselves behind.

The ancestral connections to each case are fairly clear. We did play a major part in the turmoil in each of these countries in one way or another, and that part, the producers believe, makes us complicit in the exodus of the people from those countries today.

The film makes a very strong case for its positions outlining historical truths of which most Americans today have no concept. It does go a long way toward understanding the perceptions and visions of the people of those countries and why they’re perplexed at the reactions to their very presence here. Supporters of immigration reform will find a wealth of supporting information in this well-presented documentary. It will cause you to swallow hard and reevaluate your views on one of the most vexing issues of our day. This is a wake-up call for many.

Where it does run into rough waters is in the hope of transforming those who are opponents of immigration reform. There the film comes up short. The producer’s basic premise is that the vast majority of people who come here do so with the very best of pure, good intentions. They want a better life for themselves or to be able to provide for their left-behind families. Because we helped create the problem back home, we should be far more understanding as to the plight of those who are standing at our gates. The problem is that most people on the other side of the issue can simply respond by saying that they sympathize but that we have laws and the law doesn’t allow for people to come into the country illegally regardless of each individual’s personal situation. The film says nothing about such trespasses. Where a supporter will find reassurance in this film so to will the opponent.

As a foundation for a more informed discussion, this is a wonderful film. It tells its story using highly compelling interviews with people from all walks of life. It also provides many key facts and figures that help bolster the perspective. It doesn’t work so well as a tool to change the minds of more than a few. Many of the people interviewed come from areas viewed by opponents as the bastions of the worst types of liberalism: journalists, poets, musicians, professors, etc. In the end, it’s a great film that students of all ages should know about. For everyone else, you owe it to your own stance to at least consider the film’s viewpoint.