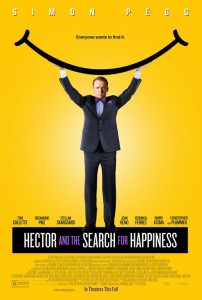 A disillusioned psychiatrist travels the world looking to unravel the mystery behind true happiness in Hector and the Search for Happiness.

Day after mundane day, Hector (Simon Pegg) doles out fairly useless advice to his cadre of miserable psychiatric patients with no sense of ever bringing them any real escape from their problems. The stress of his Sisyphus-like existence begins to weigh so heavily on poor Hector that he decides to drop everything and head off to travel the world in search of answers. This comes as a shock to his long-dedicated girlfriend, Clara (Rosamund Pike), who takes this, of course, as a rebuff to their relationship.

On his way to China, Hector meets rich, snobby entrepreneur Edward (Stellan Skarsgård), who initially wants nothing to do with the quirky Hector. By the time they land, however, the endearing doc’s infectious personality has won over the day. Determined to make a dent in Hector’s ever-present diary, Edward takes him under his wing, lavishing the doc with the trappings of unfettered wealth for a night or two. Each new stop on his trek brings not only a different locale and experience but also a unique perspective on what makes people happy. Will he find the answers he seeks, and will Clara be there if and when he returns? 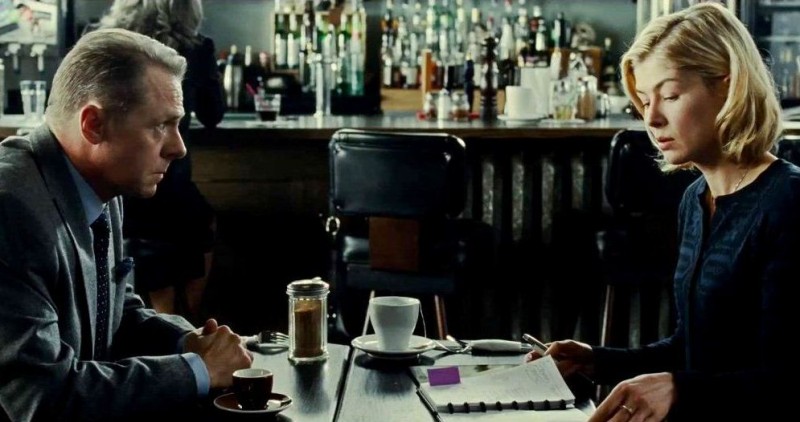 This imaginative travelogue is a wonderfully poignant film with a deeply misguided problem. Without a doubt, the person most in need of intense psychiatric therapy is whoever made the decision to cast Pegg as the lead. While bold, that selection destroys any chance of the film being taken seriously or finding the right audience.

It’s not that Pegg isn’t up to the challenge; it’s quite the contrary. The problem is one of stereotypes. Pegg is known almost entirely for his on-screen antics in several popular action comedies. That sets entirely the wrong expectations for a film that bears little resemblance to anything he’s done before. I immediately recalled Adam Sandler in Punch-Drunk Love and Ben Stiller in Greenberg.

The very first scene of the movie gives Pegg fans exactly what they want before suddenly turning into a meaty search for the meaning of life. Although Pegg pulls it all off, he does so for entirely the wrong audience. The only winners are those of us brave enough to keep an open mind about this surprisingly versatile actor. Pegg makes us believe in Hector and feel his every triumph and setback. His performance is matched by the always reliable Pike and an electric late entry from Christopher Plummer.

The film takes us along with Hector while he searches high and low for his answers. Each destination brings with it another wonderful vignette that more cynical viewers may find a bit clichéd but that the rest of us will find quite charming. Essentially, the plot plays on the classic greeting card phrase “Happiness is…” while Hector fills out a numbered laundry list of possible answers.

Its stunning locations and captivating animations that come to life on the pages of Hector’s daily journal are beautifully presented. It’s the film that last year’s The Secret Life of Walter Mitty should have been.

At times, this road trip does wander into the slow lane and takes one exit where morality seems to be in short supply. Aside from those minor missteps, this is one of those thought-provoking films that should spark some great post-film conversation. That, for me, is one of the key ingredients of happiness.