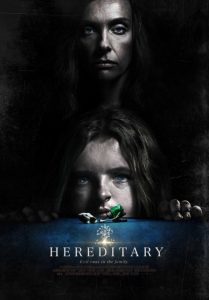 It’s very difficult to make an effective horror film, yet filmmakers keep trying year after year. If I list titles like The Exorcist, The Omen, Psycho, Halloween, The Shining, The Amityville Horror, Alien and even last year’s Get Out and It, you immediately remember how you felt when you first saw those movies. Every day for the past week or so, I’ve seen promoted tweets for Hereditary on my Twitter feed that espouse how great it is and tell me to “believe the hype.” Hype ranks as perhaps the most scurrilous form of sales and marketing because it celebrates irrational thinking to some extent. Critics can get it wrong, but audience reactions almost always reflect the real mood. When I saw Hereditary, my fellow moviegoers fluctuated between laughter, ridicule and boredom with very little horror. I entered the screening with an open mind and left feeling decapitated. Hereditary sadly only inherits the bad habits of the worst M. Night Shyamalan films.

Writer/director Ari Aster released a number of shorts over the past few years, and Hereditary is his first feature film. Although I see lots of promise in Aster’s filmmaking skills, perhaps this subject matter would have worked better as a short. It’s easy to grab people and hold their attention for a few minutes, but only the best can do that for over two hours. Aster inserts some wonderful elements here like a creepy child, a spooky house, hints at a terrible past and extremely detailed miniatures. He just doesn’t know how to pull it all together in a consistent experience. There are at least two different taglines for the movie, and if even the marketing messages don’t match, the content might be equally flawed.

The film opens on the text of an obituary. Of course, it’s not on screen long enough for you to read it. Lingering on an obituary for just an extra minute could easily heighten tension. It turns out that the obituary is for Ellen, the mother of Annie Graham (Toni Collette), an artist who slaves over dioramas with miniatures and works out her issues with scenes about her own life. Annie lives with husband Steve (Gabriel Byrne) and children Peter (Alex Wolff) and Charlie (Milly Shapiro) in an idyllic house that features her workshop and lots of dark corners. Annie and Ellen didn’t have the best relationship, but Ellen loved Charlie. The reactions of Annie and Charlie to Ellen’s death lead to more horrific events and cause Annie to explore séances.

Collette won me over in 1995’s Muriel’s Wedding and kept me coming back for every one of her films, including what I consider a perfect horror flick/ghost story — Shyamalan’s The Sixth Sense. She has such an expressive face and wide smile that I find almost all of her characters believable and lived in. Annie feels the same, yet later plot twists take Collette from understandable hysteria to silliness. Shapiro plays the weird daughter who likes to draw strange visions and disturbing subject matter. She makes a clucking sound out of habit, and the greatest failure of Hereditary is that Aster doesn’t make more use of Shapiro in her first film role after a successful run in the Broadway musical Matilda. The male actors don’t make as much of an impression. The usually reliable Byrne practically sleepwalks through this role, and his character reacts with aloofness much like I imagine Byrne did for his agent signing him up for this mess. Wolff recently appeared in Jumanji: Welcome to the Jungle, and his only reaction here is one of looking shocked or stoned — both the same.

Many problems kept me from being fully engaged and took me out of the experience. I laughed more than I was scared, and that’s a huge issue for a supposed horror film. In a séance that should creep me out, I couldn’t stop laughing because they attempted to contact a spirit poorly named Louie and repeated the name so much that I thought of the song “Louie Louie.” Sequences of relief balance the scenes of horror; unfortunately, those sequences go on too long and lead to tedium. Charlie has a serious nut allergy that is established early on, yet when faced with food that could contain nuts, she doesn’t think twice about eating it. Most horror films build up to a finale that almost feels out of control. At the point where things should ramp up, Hereditary stays flat and presents a finale that’s somehow more ridiculous than anything that came before it. Overly manipulative music, cheap jump scares and dreaded dream sequences further convinced me that Aster just wasn’t ready for this much of a challenge.

All of the elements for a great film are here. In fact, I want to see the movie suggested by the trailer. The right director could take the same subject matter and produce a better result. Instead, Aster squanders his good ideas and emphasizes the bad ones. Annie’s miniatures are stunning. A beautiful shot early in the movie seamlessly transitions from a miniature scene to the real world. Where’s more of that?! Playing off the models with the live action could have been a unique look at the plot. Glimpses of possible or imagined ghosts provide the only chills in the movie. More scenes like those could have won me over. Instead, Hereditary joins a long line of well-meaning flicks that don’t belong in the horror family tree. 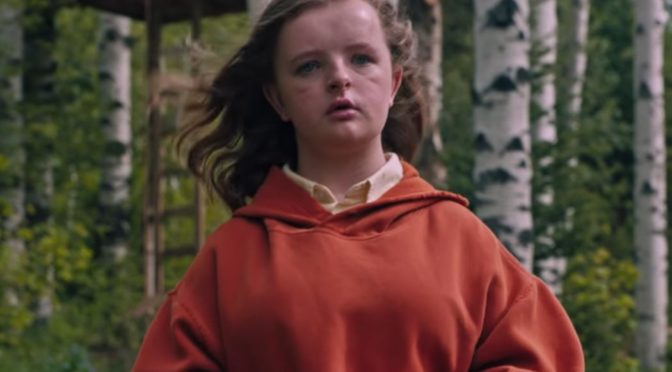