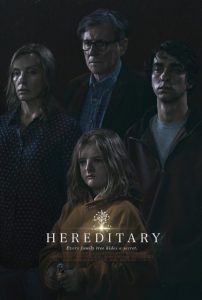 A family’s loss opens an unexpected door to the supernatural in Hereditary.

The Grahams more or less seem like your typical boring suburban family… from a distance. On closer inspection, cracks begin to appear. Closer still, the cracks unfold into crevices that themselves expand into vast chasms of disturbing dysfunction. Our front row seat inside this tormented family dynamic comes through the death of the family matriarch. Her daughter Annie (Toni Collette) spent years navigating a troubled relationship with her controlling mother. Her husband Steve (Gabriel Byrne) long ago took the first exit off their troubled highway onto a quiet back road lined with a forest of trees conveniently blocking his view of any tension. Their late-teen son Peter (Alex Wolff) seems to have followed closely behind his father, while thirteen-year-old daughter Charlie (Milly Shapiro) harbors eccentricities that would worry even the most casual observer.

As Annie struggles with the emotions — or lack thereof — of losing her mother, she’s befriended by a sympathetic woman (Ann Dowd) with a novel approach to dealing with grief. Now descending into loss, Annie takes up her new friend’s offer, only to unleash an evil power far beyond anything that she’s prepared to deal with.

This is the first feature-length film from writer/director Ari Aster, and it shows. Aster gives us a film bursting with potential that slowly deflates like an overfilled balloon. The opening premise sets the stage for an edgy, well-crafted horror experience, only to devolve into a depth of unnecessary dialogue and countless unfathomable actions from its characters.

Aster’s background in shorts gives him a hint of the right ingredients: tone, casting, score, premise. Nearly all are perfectly placed at the outset. The score is reliably immersive and haunting throughout. The cast seems almost too good to be true. Collette and Byrne are A-list stars superbly suited for the genre. As the young daughter, newcomer Shapiro is the real gem. Her unconventional look and spooky performance provide the key hook of the film’s opening act. The tone is cemented firmly into place thanks to Annie’s quirky vocation as a dollhouse and miniatures creator. Nothing is creepier than a realistic dollhouse and all that inhabit its tiny, disorienting confines.

We are mesmerized by the film’s opening moments and carefully prepare ourselves for a psychological tsunami that we’re sure is imminent, and then, nothing. For nearly an hour, the characters lose grip with all sense of reality. Their conversations become awkward and distracting. Tick tock. Choices are met with reactions that defy the intellect of the characters as presented. By the time that the tension finally returns, we’re starving for any thrill that we can find. After crossing this desert of desolation, what we get is the equivalent of a drop or two of rusty water. I’ll forgive those that mistake this mirage of wet mist for a lake of fine champagne.

This is Rosemary’s Baby coupled with dialogue and shots that turn it into unintended satire. The casting of Wolff as the son doesn’t help. His look is just naturally funny. Every time we’re supposed to empathize with his predicament, we’re instead holding back a snicker. When the deeper plot is revealed, it only adds to the joke. What started out as one of the most anticipated horror films of the year transforms into one of the year’s most campy comedies. 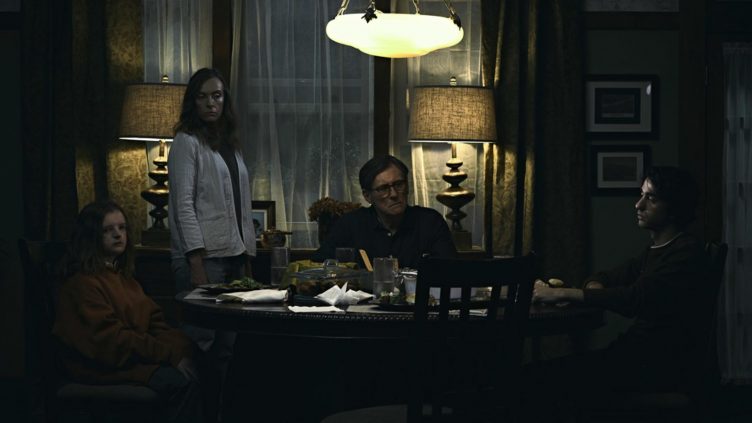