For several weeks (months?) I’ve been acutely aware of the new Hitchcock film starring Anthony Hopkins as Alfred Hitchcock. Anyone who’s seen a movie lately will know why it’s so easily brought to mind. Hopkins, in full character, has been greeting movie-goers to a funny parody asking people not to text during the movie as it drives people psycho. That is, of course, a play on the title of the movie this film  chooses as its main focus—Psycho. 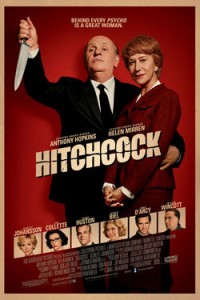 It all starts just after Hitchcock releases North By Northwest. We jump in to watch the full genesis of one of Hitch’s most successful films. Any biopic of Hitchcock would be woefully incomplete without also outlining the continual presence and impact of his wife Alma Reville, played brilliantly by Helen Mirren. Alma, many feel, might have just been the real star of the family—albeit one kept or choosing to stay in the large shadow of her infinitely more famous husband.

As you can see, the film certainly doesn’t lack for star power but, most ironic, is that it lacks a pulse—quite an insult to the target. Hitchcock’s story is a grand one but this vignette just mainly comes up short time and again. Instead of digging into the depths of his greatness we instead get the gossipy parts and little else.

Notable is the great job D’Arcy does of embodying Perkins. Using very little words we can see instantly why Hitchcock chose him for the role. Mirren is the real star of the film owning every bit of the role. On the down side Toni Collette is totally wasted here. There’s also a bit part with Ralph Macchio (Karate Kid) underscoring just how far down this guy has gone since his superstar status in the 80’s.

Hopkins, as Hitch, does a commendable job but it just doesn’t feel genuine. In fact, his entire character isn’t very plausible.

The film has some nice moments but they’re just too fleeting to save the effort. What remains is a highly disjointed affair that could have benefited highly from Alma’s input.