I had another venture out to Las Vegas this week for an industry convention and I’ve been there so many times that most of its defacto charms no longer have any impact on me. One thing that has changed over the years is that now there are many major movie theaters. Back when I first started going there literally were none on The Strip and the only other ones were miles away and rather bland. 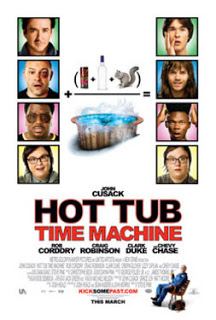 This was a small event so it was hosted at The Orleans which is off the main strip and certainly a major step down from the big venues. However, one nice thing is that it boasts an 18 screen cutting-edge theater that I’ve been to several times before.

During a break in the action I headed off to relax there and ended up seeing back-to-back movies.

The first one up was Hot Tub Time Machine. This one didn’t impress me when I saw the previews and it sounded rather dull quite frankly. The good news is I’ve often gotten more out of a movie when I’ve gone into it with low expectations and this was another case in point.

The movie very much feels like an homage to the comedies of the 80’s which is apropos given that it’s star, John Cusack, was on board for so many of them. Essentially here we’re introduced to three friends in clear mid-life crisis who’ve been drifting apart and harboring ill will dating back to their own intertwined youth. In a bid to help one of them the others decide on a retreat (along with Cusack’s nephew) back to the location of their best memories only to find it now a run-down shadow of its former glory days.

Here they encounter a hot tub with mystical properties that transports them all back to 1986 to the same moment in history they had previously experienced together (with the exception of the nephew). That sets the stage for the rest of the plot line.

The movie is rife with issues. Chief among them is a lack of chemistry between the four main players. The most glaring disconnect is with Rob Corddry who’s been hilarious in other areas (most notably as correspondent on The Daily Show). Unfortunately his acting efforts to date have been mainly misses. He just hasn’t been able to make the leap to the big screen so far.

The nephew is also a problem here. He just doesn’t fit at all. It’s not that he’s a bad actor it’s just that the casting is terrible. He looks wrong here, feels wrong here and is just play wrong here.

The film clearly borrows heavily (and seemingly by design) from several past efforts with a heavy emphasis on time travel films of the era. We’re reminded of that almost immediately when the bellhop at the lodge turns out to be Crispin Glover of Back To The Future fame. His first few scenes are pretty disjointed but the character grows on you over the course of the film. In the worst parallel there’s Chevy Chase in a role that seems like a dead-ringer for the one played by Don Knotts in Pleasantville. The problem here is that Chase brings absolutely nothing to the role. He’s a distraction in every scene he touches and you’re glad when he’s gone.

My favorite throw-back was spotting William Zabka playing a minor but memorable role here as an antagonist. The joke is that Zabka is best known as a major bad boy in several 80’s films including the biggest bad boy in Karate Kid and Back To School.

The film picks up some much-needed steam in them middle and provides some decent laughs until it once again comes back to earth with an extremely unsatisfying ending. All in all it’s not a terrible film but it’s definitely not one they’ll be talking about 20 years from now.