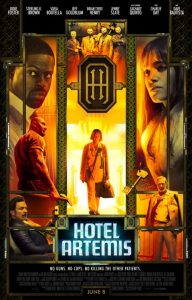 A members-only medical clinic in the heart of a besieged city caters only to outlaws in Hotel Artemis.

The year 2028 finds Los Angeles in open revolt with the privatizing of its dwindling water supply. This new reality opens the door for rampant crime and chaos. In such a world, anything becomes possible — even secret urgent care facilities that service only crooks. A converted hotel in the middle of the carnage will treat just about any wound, without question or judgment, as long as the patient is a member in good standing.

Its grizzled nurse (Jodie Foster) parcels out critical care with a bedside manner befitting of its clientele — that is, with the same level of trust that any of us would place in the Antichrist. Uncompromising rules are the only Bible to which The Nurse adheres. She’s dutifully assisted by an orderly most appropriately named Everest (Dave Bautista) — a hulking specimen who would make a granite boulder feel inadequate.

This is a facility that has seen it all, or so one would think. Its latest influx of patients will make a mark that threatens to leave the clinic itself on life support.

This is the epitome of a popcorn action film. The characters rarely surprise us. The dialogue is corny and mainly forgettable. The plot is entirely contrived, but the action and the ambiance draw us in all the same. The experience feels a bit like a melding of 1981’s Escape from New York and 2014’s John Wick.

In the lead, Foster sports the look of a no-frills grandmother with a deadpan gaze that could stop a bullet. As the sidekick, Bautista is so perfectly cast that he nearly steals the show. Nobody feels out of place in an environment that embodies the unseemly. Recently little more than another pretty face, Sofia Boutella leaves the audience breathless as an assassin with mad determination and skills to match.

Like many such films, it loses steam in the details. It’s barely over 90 minutes and somehow feels a bit long. That short a film simply can’t support the number of characters involved and one or two superfluous subplots that pull us away from its naturally magnetic draw. It’s the kind of foundation that would have been a masterwork in the hands of Quentin Tarantino.

As it stands, it’s a raucous romp of a film that leaves behind a lot of empty popcorn bags. 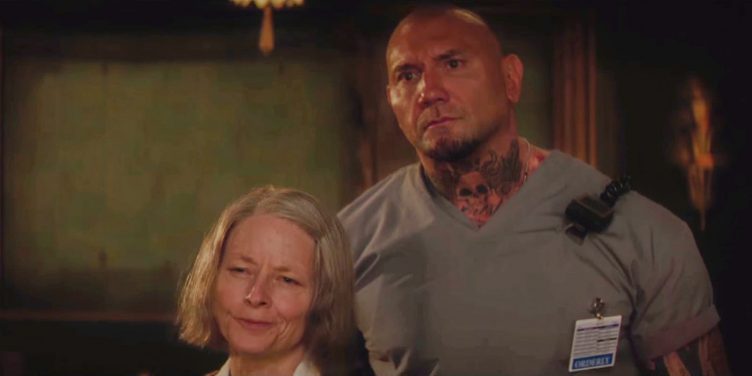