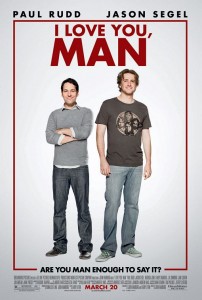 Just yesterday I caught the next “Apatow-like” movie called I Love You, Man. Like the others in this continuing genre, it includes alums from some of the others in the group. It’s getting to the point where a flow-chart might be fun.

Anyway, when I saw the previews for this one it looked a bit dull to me. The solid reviews on Rotten Tomatoes and a recommendation from a friend helped to get me behind seeing it. It helps that I like Paul Rudd and find Jason Segel even more to my liking. Segel’s character in this movie offers a wonderful contrast of personalities that he handles with ease.

This one is pretty standard fare. Don’t expect lots of rapid-fire jokes or even a bunch of big laughs. It’s entertaining and includes some nice enjoyable laughter sprinkled throughout. One stand-out in the movie is Rudd’s fiance in the film played by Rashida Jones. I’ve seen her in other vehicles and have never really found her that entertaining or attractive. Here she’s both. One interesting note is that she’s the daughter of music mogul Quincy Jones and yet, in a couple of scenes—unless she’s doing some amazing acting—it appears as if she doesn’t have a whole lot of rhythm. She doesn’t need it but it’s just something you’d think would go with the heritage.

In the end it’s a movie that you won’t regret seeing but that I expect will be hard to remember a week or two from now.

Oh, in a side note this one was also marred by phone use. I knew we were in trouble when I saw the myriad of Blackberry‘s and iPhone‘s littered all over the theater while waiting for the previews to start. Two high school girls sat directly in front of us and one was knee-deep in a text conversation as they started. The phone then thankfully went away. Sadly it was just a rude taunting by the girls. Within minutes of the movie starting she began an all-out text blitz. Phone on, phone off, phone on, phone off. After the third foray I leaned forward and said, “Could you please stop the texting?” She replied, “Oh, sure.” To this, the older couple next to me could be overheard voicing their thankfulness for the intervention. However, just minutes after that she was back at it. Her answer to my query was to just slide more to the right away from me. After a bit more of this the older man leaned forward and said, “Look, get up and stand at the back of the theater if you’re going to play with your phone.” That finally seemed to put an end to it. What’s more is that, for the first time, the pair seemed to be able to enjoy the movie.

This just has to stop. No less than four different phones were opened, brightly, during the movie. Meanwhile my own phone received two calls and four texts while the movie ran. I know this not because I answered them but because of the light vibrating I felt from it in my pocket. I don’t know how but I managed to contain myself for a whole 90 minutes without answering these and I didn’t seem to suffer any ill effects either! If only I could bottle that restraint I could make a fortune. It’s time for theaters to get off their asses with this and start physically removing people from the theater for this infraction. I’d pay extra just to know I’m in a theater with a bouncer at the back who will home in on anyone with a phone and toss them out at the first sign of trouble. I’d gladly put up with that distraction as it will only take a couple months of that before the idea sinks in.