The first comedy of the new year is Identity Thief starring Jason Bateman and Melissa McCarthy. Bateman plays Sandy Bigelow Patterson, an every day kind of family guy from Denver who suddenly finds his world turned upside-down when “Diane” (McCarthy) steals his identity and starts exhausting his accounts and his sanity. 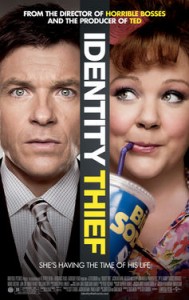 It’s a recipe for a good movie but the director and the script get the entire process wrong. It’s not a total loss but it’s a working example of how not to make an effective movie.

The film tries to be all things to all people. It’s funny, sentimental, touching, violent, slapstick and more, all in small parts that simply do not mix well together.

Just when you think the film is going to settle in and deliver in one area, it touches the fringes and then darts off to try to tackle another leaving the viewer entirely unsatisfied.

That’s not to say it’s not a funny movie—it is, but not consistently so. If you’ve seen the trailer you’ve seen most of the comedy the film has to offer.

None of the surrounding characters are worthy of the screen time they inhabit and it’s not any fault of the actors. The material is just ridiculous. It’s as if the script had writers for each character working in their own dark closet without any interaction with any other writer or plot line and then stuck it all together.

Bateman has the chops for it all but can’t get out of neutral. McCarthy, unfortunately, goes in reverse here and that’s a real shame. You can sense there’s a talent underneath it all beyond what we already have seen in Bridesmaids but it never gels.

It might be the number one movie this week but both stars should (and likely will) do better.