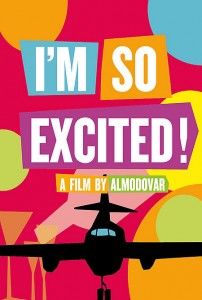 Passengers and crew consider their options on a potentially doomed flight in the new offbeat comedy from Spanish writer/director Pedro Almodóvar.

Imagine taking the antics of 1980’s Airplane! and mixing it with the eroticism of 1986’s 9 1/2 Weeks then have it come from Spain. The result wouldn’t be that dissimilar from what we get with I’m So Excited!

This latest entry starts off with a few major cameos with actors from Almodóvar’s past films playing members of the ground crew. Their single scene includes a key plot point that’s surprisingly easy to overlook. It seems, through haste and distraction, that they’ve managed to damage the landing gear of the plane.

Once on board, we meet the flight crew, including three exuberantly gay men who have a bit of a major drinking problem. We also find out that everyone in the Economy cabin has been drugged. Whether this is due to the technical issue or just par for the course for this crew isn’t entirely clear. I’m fairly certain that the order of events had the pilots find out about the problem after the crew drugs the passengers, which makes for a very odd twist.

The pilots have their own troubles. They realize they’re going to need to execute a very risky emergency landing but only if the control center can find them a suitable place to attempt it — a more difficult task than one would expect.

Those left awake, including a few passengers flying in Business class, all bounce around the plane dealing with their own problems and the realization that this could be the end. Thus, everyone is faced with the age-old question of what to do if this is their last day on Earth. Fitting with the answers of many, rampant sex is the clear answer, and on this plane, heterosexuality is an endangered species. I’m not exactly sure why, but this is definitely a film that’s a celebration of alternative lifestyles. In addition to the gay characters, we have bisexuals, a prostitute, a dominatrix, a transgender flight attendant and a raving psychic virgin.

What follows is a strange cocktail of highly-charged eroticism and lots of funny bits with potentially the highest count of penis and sperm jokes ever put on film. It’s all entirely goofy and patently ridiculous but still oddly entertaining in parts. It just isn’t sustainable, and the joke runs out of runway midway through.

You should also be aware that the film is very dialogue heavy. That’s only a problem because of the subtitles. You’re sure to miss out on entire sentences with even the slightest glance away from the screen.

I also need to point out something that I rarely bother to mention. The sets, costumes and effects are horrid. Everything inside the plane looks completely unrealistic while all the exterior shots come off like a cartoon or a screen capture from a flight simulation program. Thankfully, as a comedy, this adds up to a minor distraction.

All in all, it’s a curious film with some interesting moments and some good jokes that just don’t quite get us to our desired destination. Unfortunately, the most exciting thing about the film is its title.